When we were Kings VI

[JB's note:
I was originally planning to write about something else today but when I realised we'd be in the middle of Anand - Topalov I had a rethink. To be honest the start of the match took me rather by surprise. This is partly because I'm not visiting chess news websites like Chess Vibes or Chessbase so much these days but I also think it says quite a lot about the lack of an impression that chess makes in the mainstream media these days.

Today's blog article was originally written in January but, for reasons that won't be at all clear when you read it, it got held over because of that earthquake in Chile. Despite Tom's encouragement the world, as reported in the news and on TV at least, doesn't seem to care very much about Anand-Topalov in particular or chess in general. I like to think that it's worth remembering that it wasn't always like this.]

News of the World

I’m writing this in my local coffee shop having just enjoyed a nice cup of tea whilst taking a look at Jon Speelman’s chess column in The Independent. It happened to be Spess I was reading before getting down to work but it could just as easily Malcolm Pein in The Telegraph or Ray Keene ('Ray Keene' if you prefer) in The Times. It wasn't that long ago that weekly was the typical interval for chess articles in what we used to call the broadsheets but now The Guardian seems rather out of step in running theirs every Tuesday.
Just as I was putting down my tea cup and powering up my laptop I had a ‘the world doesn’t make sense’ thought:-

We live in a time where there’s more chess in the papers than ever before and yet the game has completely disappeared from the news.

Which is pretty strange when you think about it.

Specialist chess columns may be great for we confirmed players but they come at a price. You’ll find Speelman at the fag end of the Indy’s “Life” supplement, Malc under a pile of obituaries and RDK hidden away somewhere between the financial news and the sport. They're easy to miss and easier still to skip over if you happen to accidentally fall upon them. ‘Chess’, the placement of the columns tells us, ‘is a speciality subject of interest only to those already interested’ and every article might as well be headlined ‘Nothing For Outsiders Here’.

It wasn’t ever thus. When we were Kings chess used to be news and because of that it was part of the collective consciousness. Not a big part perhaps but in the 70s the game was a mainstream subject and treated as such. When I mention this in conversation I often get incredulous looks in return but have a look at some clippings I've had kicking around on my hard drive since a spot of research at the British Library last year:-

WARRANT FOR FISCHER
Pasadena, California, Nov 1. – Police have issued a warrant accusing Bobby Fischer, aged 34, the former world chess champion, of forcing his way into the home of Mrs Holly Ruiz, a magazine writer, and hitting her on the face because of a story about his affiliation with the Worldwide Church of God.

FISCHER RULING
Pasadena, Nov 16. – Judge M.G. Fransciscus has announced that he is prepared to dismiss criminal charges against Mr Bobby Fischer, the former world chess champion who had been accused of assaulting Mrs Holly Ruiz, a woman magazine writer. Mrs Ruiz has withdrawn her complaint after receiving an undisclosed sum in an out-of-court settlement of her civil claim for damages.


Today we can only dream of this level of media interest. OK, there were the Danny Gormally and Vlad Tkachiev kerfuffles but they were two isolated incidents more than three years apart. Here we’ve got a trio of (admittedly short) pieces in barely a month and don’t forget Fischer hadn’t played for over half a decade by the time of these reports.

Kasparov? Yes that name crops up in the media from time to time but he's a rather different kettle of fisch. Other than that one-off burst of publicity over the Karpov match at the end of last year, when Gazza gets mentioned it tends to be in connection with his political activities. The fact he was once the best chess player in the world might be mentioned in passing as a curiosity but it’s not likely to be at all relevant to the story.

As implausible as it sounds at this distance, between the 2nd of November and 9th December 1977 The Times published three short stories relating to an incident which was deemed to be ‘news’ because one of the participants used to play chess. In the Golden Age even ex-chessers were celebrities. Well they were if they were Bobby anyway. 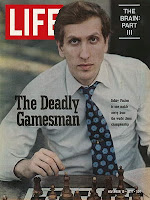 And then there’s Ray Hankin.

FOOTBALLER BANNED
Ray Hankin, aged 21, the Leeds United footballer, was banned from driving for a year and fined £120 by magistrates at Wetherby, West Yorkshire, yesterday after admitting a drink-driving charge.

That season Leeds United finished ninth in the old First Division of the Football League* and Hankin was their leading scorer with 21 goals. His story makes an interesting contrast with the Fischer reports don’t you think? Today it’s inconceivable that a drink-driving footballer from a top flight club would be allocated less news space than a former world chess champion getting shirty with an uppity journo but that’s how it was thirty years ago. 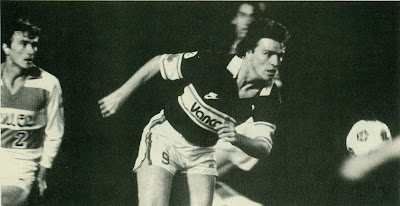 So it’s the best of times and it’s the worst of times. We’ve got specialist chess columns but even though papers are many pages thicker than they once were there’s no room for chess in the news anymore.

It may be strange but that's the way it is and I’m not sure that there’s much if anything the chess world can do about it so I intend just to enjoy what we’ve got. Which is why, now my blog is written, I'm about to have another cup of tea and take a gander at what Malc’s got to say today.


NB:
Thanks to Sean for the Joe Jackson tip.

* This was back when in football terms “first” meant “first” and not “third”. Leeds, by the way, finished four points ahead of Manchester United who were 10th and ten points ahead of Chelsea who were 16th. Nottingham Forest were champions that season which rather underlines the point that the world was rather different back then.

the world was rather different back then

Portsmouth are always bottom in my world.

"Specialist chess columns may be great for we confirmed players"

Was it chess that was covered more prominently or Bobby Fischer?

Its such a pleasure following the World Championship in the internet age. There is literally too much information. That is much different than it was 20 years ago when I would have to live by a few Newspaper columns and wait for the chess magazines to arrive.

It was chess. Fischer was certainly part of the reason for that but not all ... see the original WwwK and come back Friday for a little more on this.

@Phil:
I rather suspect you've corrected me on this before!

You're quite right, of course, to say that the internet has made an incredible difference to coverage of the big events. Now with wireless internet I can follow every move of the world championship without even getting out of bed. That's something I couldn't even have dreamed of when i started playing.

The internet is great for us (Phil!) chess players. There's a price to pay though ... and the downside is the disappearance from the game as a mainstream news subject. Not that those two things have to go together.

Btw:
I should have mentioned before that the format of the Independent has changed since I wrote the original article. Spess' chess column is still there but the problem of it's location remains.

Similarly, there's been a change of staff at the Guardian

which seems to have led to a change in the reporting of chess. The results from the London Chess Classic were recorded in the sports section of the newspaper but by this year's Linares that seemed to have changed - there was nothing. There was nothing about game 4 of Anand-Topalov in The Guardian of 29/4 either.

Ah, but you may in fact recall that my fears were unfounded...

Unfounded perhaps EJH but there's no coverage of the World Championship in The Guardian today. The good news is that amongst the serious newspapers that's very much the exception.