When we were Kings V 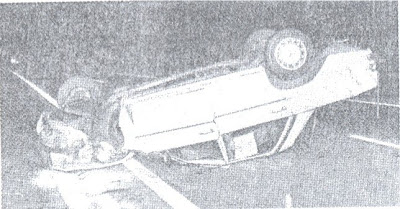 A narrow escape for Korchnoi and Keene

It is, as my friend and fellow blogger T.C. pointed out on Monday, almost that time again. The only problem is nobody is quite sure precisely what "almost" means.

According to the original schedule the opening opening ceremony of the Anand – Topalov World Championship match is due to be held this afternoon and the match itself is supposed to kick-off on Friday afternoon. As Tom said though, Anand's was one of the many journeys disrupted by that Icelandic volcano. Vishy asked for an adjournment but at the time of writing - Tuesday evening - the (Bulgarian) organisers are refusing his request.

Anand and his team eventually managed to get to Sofia but only after a 40+ hour road journey. That doesn't sound like much fun although he should perhaps think himself lucky; back in the day Viktor Korchnoi and his second Ray Keene took an unplanned road trip on the way to Belgrade for Vik’s Candidates' Final match with Boris Spassky and it very nearly resulted in something much worse that a numb bum.

When we departed, we ordered a taxi, which should have taken us to a ferry, then a trolley-bus followed by a train to Zurich, and so on. But the taxi driver offered to take us directly to Zurich for a reduced fare. After some thought, Keene and I agreed. After crossing the German-Swiss border, we reached the direct autobahn to Zurich. As night was falling, I was sitting next to the driver, when in the gloom a lorry suddenly loomed up ahead. I shouted, and the driver managed to turn the wheel slightly. We crashed into the lorry and turned over, I think, once. For perhaps a couple of seconds I lost consciousness. And then I unhurriedly crawled out of one of the car windows. The lorry in front belonged to the Swiss army …

Boris Spassky almost won the Candidates’ Final by default. On the evening of November 8th 1977, the taxi taking Korchnoi and myself to Zurich smashed, at speed, into the virtually unlit back of a Swiss army lorry. Our Mercedes veered sharply, swung right over and then broke into a spin on its roof, across three lanes of the motorway, until it was brought to a standstill by the crash barrier. I escaped through a demolished window, and managed to help Korchnoi, who was crawling out from underneath the wreckage. His right hand was covered with blood and he looked as if he had been scalped. We had been lucky: the car was destroyed but it did not start to burn, and we had not been hit by any of the traffic that had hurtled past us on the motorway. Korchnoi’s reaction was amazingly calm. He took his miraculous salvation as a sign from above that he was indestructible and that he would therefore be immune from Spassky. Naturally he was not pleased at what had happened but he was far more upset when he lost the eighth game of his match with Polugayevsky.

It may have taken him a couple of days but at least Anand arrived in Sofia in one piece!

Well what now? I may well have been proved wrong by the time you read this but somehow I very much doubt that we’ll see anything resembling this kind of report appearing anywhere in the press this week ...

KORCHNOI DELAYS SPASSKY MATCH
“Belgrade, Nov 15. – The world chess championship semifinal match between Viktor Korchnoi and Boris Spassky will start next Monday instead of tomorrow as had been planned.

Korchnoi, who injured his hand in a car accident recently, asked for a postponement today and Spassky agreed. – Agence France-Presse”

... and not just because chess never makes the news anymore.

In any event, having finally arrived in Sofia Anand might be well advised to strap himself securely into his seat. From here on in the ride is likely to get really bumpy.

Mystic JB's predictions proving as accurate as ever.