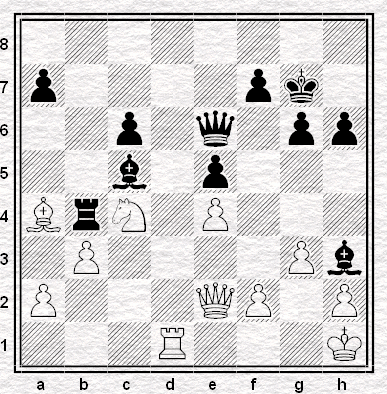 So (since moving house last Monday) this weekend I finally drilled back together my bed, solved a jigsaw puzzle of wood to make three book-cases, and reclaimed the floor from an expanse of my stuff. Amidst which, I rediscovered an old charity-shop-find I'd almost forgotten about: the book World Cup Chess by Lubomir Kavalek.

The what by who? Well: The Chess World Cup was a series of tournaments in the late 80s, which no longer exist anymore. They were organised by the Grandmasters Association, which also doesn't seem to exist anymore. As for Lubomir Kavalek, you can read about him here; he is retired now.

Not everything in life and chess is temporary and full of change of course. In chess, tournaments and organisations come and go, but we remember the brilliancies like immortal works of art - and humans will do so in awe and admiration until the game is no longer played. And the big big blunders live on indefinitely as well - albeit recalled in a somewhat different mood.

But here, there is an intermediary category too: the overlooked instant wins, but the player won later on anyhow. These slip out of memory. Do not find a place in the anthology, or biography. I found the diagram position on page 168 of the book I mentioned, and it's an example of this. It's from a game between Belyavsky and Ljubojevic. The latter played black, and chose 32. ... Bd4 here, and went on to win on move 61. But he overlooked a sequence that would have made the game unforgettable.

Have fun spotting it - and better luck with your own moves!
Posted by Tom Chivers at 7:50 pm

The idea is to play ...Bg4 forcing White to play f3 to save the exchange. Then, if you can just distract the Queen somehow from guarding f3, you get Bxf3#.

Yep - you got it, well done. An amazing sequence, imo!

As is often the case I guessed the correct first move and spotted the likely general theme of mating with two Bishops - but unfortunately couldn't connect one with the other by coming up with a specific sequence of moves.

Well at least you're in good company Jonathan - Belyavsky and Ljubojevic were two of the best players in the world when they played this game, and they both missed it!