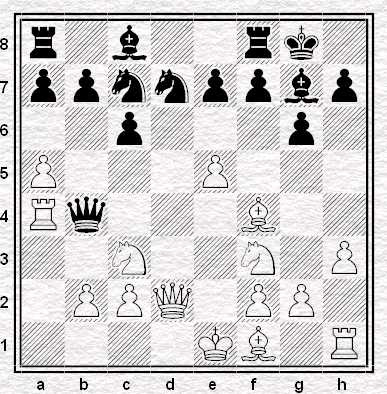 Yesterday evening, Chris, Richard, Alexei and I represented the club at the Bielski Cup, held this year at South Norwood Chess Club. In each round you play two blitz games against the same opponent (one after the other, not simultaneously - although now I come to think of it that sounds like fun).

We ended up coming third out of four - probably the best we could hope for given we had the massive handicap of having me on top board. That would be bad enough in itself but I was outgraded by both the bottom boards of Crystal Palace (who won) and South Norwood A (who came second) so we were obviously going to be up against it.

The position at the top arose in my very first game of the night. I was White against a 188 graded guy from Crystal Palace.

Hardly very inspiring play but I was already getting on for two minutes down on the clock (in a 10 minute game) and half a point was much more than I expected to get from the match.

To my huge suprise he played ... Qxa4 and I went on to win. At the time it felt like I was about to nonce it up at any moment but playing over the game again (see below) I seem to have kept control pretty well. Of course being a Queen up tends to make things somewhat easier!

It's a bit of a pity I missed mate in 2 on my last move but since he resigned anyway perhaps it doesn't matter too much. In any event this is the first time I've beaten a player graded 170+ so I'm pretty chuffed about that.

That left us with our last round tie against South Norwood B. Although they'd lost 7.5 - 0.5 against Crystal Palace they'd somehow got a 4-4 draw against South Norwood A so were 2 points ahead of us going into the match. We were going to have to win at least 5.5 - 2.5 to reach third place. I'm glad I didn't know that at the time!

I won the first game on time with just two seconds left on my clock when his flag fell. In game two I'd messed up a very promising start to reach the following position:- 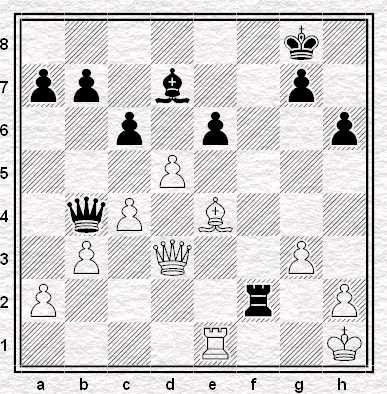 even here Qe3 is reasonable for White since if ... Rxa2 then dxe6 and Black can't take it back because of Bb1 with all sorts of nasties in the pipeline.

Unfortunately instead of Qe3, I thought I had
dxe6 Bxe6
Bh7+ Kh8
Rxe6

and the Queen and Rook cover the back rank ... So I played it.

Black's reply surpised me but would not, I'm sure, come as a shock to the erudite readership of this blog.

Afterwards I could not even console myself with the thought that I had, at the least, created an entry for Justin's Worst Move on the Board contest (here and here). In the diagram position dxc6 is equally bad and there are three moves (Qc2, Qd4 and Qf3) that manage to get White mated in one rather than two.

So despite my rather poor effort we made it to 8 game points and snuck ahead of South Norwood B who ended up on 7. It was a good team effort. Chris top scored with an impressive-given-the-strength-of-opposition 3/6 and the remaining points were shared pretty much equally between the rest of us.

Thanks to Chris for organising us. Let's see if we can get a few more players involved next year and enter at least a couple of teams.

I thought Tom had written the article. Then I figured he had probably beaten a 170 before!
(Andrew)

Also, Andrew, I'm sure Tom would be infinitely less impressed with himself after winning a game when he'd effectively been given Queen odds.

Don't rain on my parade Justin!

I shall take comfort from the fact he has a grade of 190 in a different column. That makes it even better.

All things considered, though, as the day progresses I'm getting wiser to the fact that a queen down is a queen down regardless of how good you are.

Re - queens down. I think it's a question of how weak your opponent(s) are!

I first thought your opponent must have taken the rook to avoid the draw - and to fight on for the win anyhow. But if that had been his decision, he should have played 1...Qxb2 first, and then after 2.Ra2, 2...Qxa2. He'd get an extra pawn, and the knight would be marginally more displaced on a2 than on a4.

So he must really not have seen that 1... Qxb2 was a move - real board blindness.

Tom,
at the time my thought was the same as yours - he was going to try to win Q for R down. His comments after the game convinced me otherwise.

He said something to the effect that as soon as he played ...Nc7 he realised he'd cut of the Queen's retreat and could be in trouble. Add that to the fact that he'd already decided not to play ... Qxb2 a few moves earlier - I think he just mentally edited out the possibility of capturing the pawn.

If he was really trying to avoid the draw he might have waited to see if I'd repeat moves first and then take on a2 like you suggest.

(also: Fritz suggests Black doesn't have to lose his Queen at all - instead after ...Qc5 then Be3 hits it again but Black has ... Bh6. He still loses a piece but it's not quite as bad as giving the Queen up.

Bottom line: I think it's a classic case of how it's possible to make a really bad move if you lose objectivity after making a mistake or being suprised.