The Worst Move On The Board II

In January last year I was playing a open tournament in Marianske Lazne in the Czech Republic and met a Polish player, rated 2186, in the seventh round. Having made my twelfth move (12...Ne5-g4) in a Spanish Exchange I got up, satisfied with my position, and walked around the tournament hall for a while. 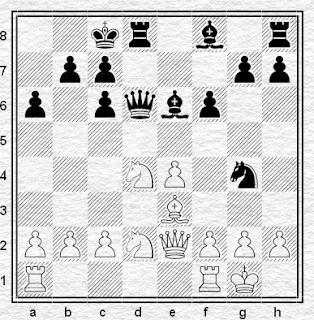 After a few minutes I looked over at my board from the other side of the room and thought I saw a white knight inexplicably on e6. My eyesight without glasses is not to be relied upon so I hurried back and saw that it was, indeed, so. I looked at the board and at the player and back at the board again and finished the game swiftly.

It wasn't the Worst Move On The Board, though: there were any number of ways of allowing the mate. What made it inexplicable is that my twelfth move threatened my thirteenth: it's hard to see how the threat can have been overlooked. (I suppose my opponent might have seen it, but then somehow thought "after the knight takes the bishop, the queen has to recapture". But from the expression on his face after I delivered mate, this wasn't the case - he'd simply missed it.)

Possibly this helps to explain the two blunders we looked at in the first of this series. In each case, the threat only existed after the loser had made his final move. It only existed as a consequence of that move. Easier, I suppose, to overlook a threat which doesn't actually exist at the time you are considering your move.

Even so, it's hard to credit today's sample, taken from a game played at Hastings a dozen years ago between David James and Daniel Bisby. The latter's a good player, rated above 200, a frequent opponent for Streatham and Brixton players in Surrey League matches against Redhill. His last move in the diagram position was 13...Qd8-c7. His next move delivered mate, after White found The Worst Move On The Board - the only continuation that would allow instant defeat. 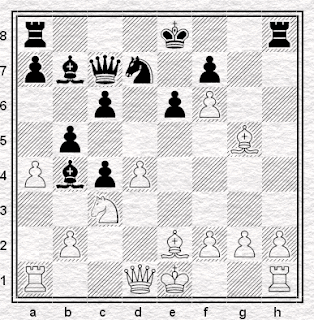 I looked up White's rating and at first assumed it was the David James listed as being graded 48, despite the tournament being entitled the Hastings Masters. (They have tennis tournaments called "Masters" which usually means that the players were good twenty years ago but are now older, fatter, and unwilling to play more than a single set.) I don't think it was, though. I think it was a player currently graded 193 ECF - or, if you prefer, 2224 FIDE - and a FIDE Master.

See? Anybody can do it. Or there's another way to put it. If players like that can do it, so can you.

I wonder how much of that was theory?

I only have general sources available. Batsford's MCO gives 7. ... Bxc3+ instead of ... b5 as played. Presumably a fair amount of this game would be familiar to specialists in the Semi-Slav.

I think one of Botvinnik's early victories in his variation, the one that is quite like this one, features him going ..O-O-O and his opponent Be2 w O-O. His opponent lost to some kind of check on the a7-g1 diaganol, followed by ..Rxh2+ mating etc.

So it's a thematic mate!

That's the fellow. There's almost something of the Benko about black on the g and h files.