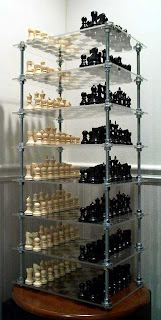 For those who find chess all too easy, for those bored of winning all their games in 15 moves, with only a minute taken from their clock (that pesky toilet break of course) and blindfolded - there's some good news of a fresh challenge in your lives, for some clever fellow has invented Three Dimensional Eight Level Chess. And if that's not enough added complexity to really get those little grey cells firing, he's introduced some extra pieces to get the hang of as well, like "The Mace", "The Rookbishop", "The Red Knight" and "The Grand Knight."

But even that's not all! For as far as I can judge from the picture, you will also need to be seven foot tall to play, no less. At least Andrew will be alright.

Ah right. I thought eight chess sets were for sale.

Indeed they did: it's got the famous line from Spock to the effect that as he programmed it himself, he should be able to do no better than a draw. Programmers will talk to you about the inaccuracies contained in this statement, if you want (which you may not) as it enables them to discuss programming and Star Trek simultanously (writes bloke adopting tone of superiority not necessarily compatible with posting on a chess blog).

I think 3D chess is a regular fixture in the original series - and that sort-of bar where Uhura sometimes sings truly humiliating songs.

I seem to recall Spock also loses to Kirk, after telling Kirk he's been playing illogically. Evidently, there is some moral about Kirk's spirit here, and the limitations of logic.

Yes - the moral being it's a wise career move, in Star Fleet just like everywhere else - to chuck games against your superiors.

Btw:
all of this allows me to trail my next blog piece (currently being written) about Chess in Blake's 7.