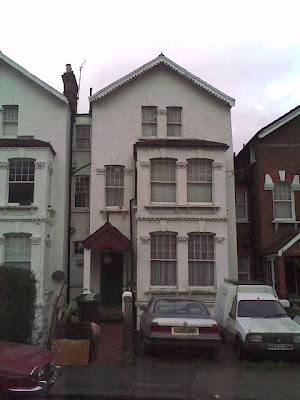 It seems Isidoro Gunsberg, who challenged Steinitz for the World Championship in December 1890/January 1891, lived just around the corner from me.

Gunsberg did much better than Zukertort and Chigorin. He only lost 10.5 - 8.5. Around 20 years later he was living in Knollys Road, Streatham. The chess club was definitely active back then. I wonder if he ever popped along for a game.

The house is still standing but, as you can see from the photo above, it doesn't look as if it's received too much attention since Isi was around and is looking a little grubby now.

Are they still handing out Blue Plaques I wonder?
Posted by Jonathan B at 10:08 am

What does Kasparov say about the match?

Not much is the answer to that one:-

"Another worthy candidate for the world crown at the time was considered to be the Anglo-Hungarian master Isidor Gunsberg (1854-1930), winner of the tournaments in Hamburg 1885 and Bradford 1888. After drawing a crucial match with Chigorin (Havana 1890), he issued a challenge to Steinitz, and eleven months later they met in a match for the world championship (New York 1890/91). They played to the best of 20 gamesm and the champion again held his title, winning 10.5 - 8.5. The challenger did not seriously threaten the throne, but he showed himself to be a pretty solid positional player: as Tarrasch later wrote, 'Gunsberg was the first of Steinitz's opponents to fight against him with his own weapon."

And that's more or less your lot. A bit later though, Kasparov (or his ghostwriter) does report this exchange...

"When in the 12th game [Gunsberg] employed the Evans Gambit for the first time, before playing 6. ... Qf6?! Steinitz unexpectedly asked: 'Do you think that I am morally bound to play exactly the same defence as I did against Chigorin?" Gunsberg replied: 'You are not exactly bound, but the public will expect you to defend your own theories!"

Can that really be true? It's hard to imagine Kramnik and Topalov having a natter in the middle of a game.

Update:
Kasparov also gives the ending of a game Gunsberg lost(as Black) to Tarrasch from Frankfurt 1887. Gunsberg is described as, "... not some boy off the street, but the winner of the Fourth Congress and a future challenger for the world crown, a match opponent of Chigorin and Steinitz."

The only other mention of Gunsberg is the reporting of a game against Chigorin (Isi lost on the White side of a Ruy Lopez) from their drawn match in Havana.

You may also remember this ending which I first saw in Chernev's The Most Instructive Games Of Chess Ever Played about thirty years ago now.

... and, according to Mr. Winter's list of residences, just around another corner from Jonathan lived one H. Staunton (at 2 Leigham Avenue).

...and R.B.Wormold ( he of the devasting Wormold variation of the Ruy Lopez, if I'm not mistaken: 1e4 e5 2Nf3 Nc6 3Bb5 a6 4 Ba4 Nf6 5 Qe2 ) lived at 11 Angell Road on Lambeth - that's downtown Brixton isn't it?
That's three. Perhaps we could do a sightseeing ramble of these residences, recreating the skittles games these worthy gents would have played in the local hostelries...(Martin)

Are there any Blue Plaques for chess!?

Martin - good idea. Jonathan & Angus are preparing a review of the Priory Arms for chess, and possible there will be more such stuff in a 'chess club in a pub' series. Your idea could tie in to that.

Angus:
Justin had already pointed the Staunton connection out.

I was planning another blog entry on it but when I went along to take the picture this afternoon I found that 2 Leigham Court Road no longer exists.

Still, I will walk past the site where it would have been every time I go to the club at the new venue.

BTW: I was in a coffee shop on the High Road this afternoon when Cynthia Payne, still a Streatham resident and one time purveyor of sex parties to the rich and famous
(see Julie Walters' film Personal Services) wandered in.

To the best of my knowledge, though, she has never been a chess player.