Pop In To Popov's? 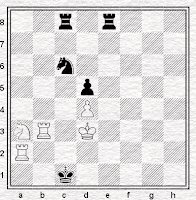 A new addition to the side-bar: Russian site SuperProblem, authored by problemist and study composer Grigori Popov. It deserves but also requires a note of explanation.

The site is a strange store of many remarkable chess problems and studies. Whilst some are contemporary by Popov himself - whom you might recall from this typical comedy classic - the site reaches much further back. In fact, the earliest puzzle I found so far (diagram right; click to enlarge) is from 1283, where it is black to play and mate.

Now, the site presents non-chess problems too; those of language. The confusingly translated note which accompanies the above position is also typical of the site: "In chess culture of a middle Ages the outstanding place was borrowed 'by the book of games' of the king Alfons Х Wise (1221-1284). In this book there were also chess problems - mansub. One of them." 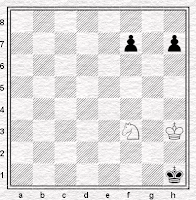 But it would be a shame if that kind of obstacle - or the site's utterly opaque organisational principle - put you off. Whilst hardly encyclopaedic - the above has a even more ancient predecessor for instance - there are many gems here. I for one was pleased to discover the position on the left - where it's white to play and mate - as I believe Popov says it was composed by К. яниш in 1837, making it the first of its delightful kind; after which, others would quickly follow, of course.

At least we often do, when we think it's worth it.
Posted by Tom Chivers at 6:32 pm