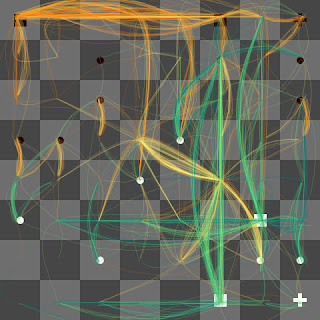 Well, as the authorities are going to dope control human chess players, they may as well start doing the same for chess computers, since it equally makes no sense at all. Or does it? To the right is a screenshot of how Thinking Machine 4 pictures the board - and you'll be relieved to know it plays as if it's on drugs as well, as you can find out for yourself by giving it a game. Even the pieces look a bit like pills, but these ones you shouldn't be afraid to take.

Thanks to Andrew for that tip, which he found via Dutchman Tim Krabbé's diary. 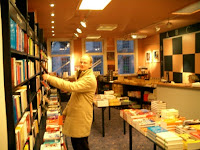 Which reminds me of another little something. I was in Holland for a holiday last weekend, part of which involved wandering around some bookshops in the town of Leiden and small city of The Hague. In both of which there were sold more chess books than I'd ever seen before in one place. The Hague bookshop (pictured) was particularly impressive. The whole upstairs of the store was dedicated to all things chess: first a big room with new products, then a corridor lined with big framed photo portraits of the stars for sale, then a smaller room stacked with second hand chess books. 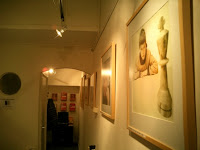 Thank goodness we live in an anti-brain, barely-literate, celebrity-soaked culture in Britain, where our high street bookshop windows typically raise nothing more than a minor sneer - at least from me - as with dollar signs in their eyes, casting the shadows of ghost-writers, the autobiographies of Jordan and Rooney grin from the shelves. It keeps my credit card sober, at least.
Posted by Tom Chivers at 12:25 pm

that bookstore manages to look quaint and modern at the same time. i love the photo/painting. what i could see from that angle, anyway.

high street sounds like i'd hate it. only a keyring then? definitely.

drug testing for chess players. roids? no. speed? i'd imagine not. weed? hardly worth it. silly.

RE: Cannabis and chess...

"Canadian IM Lawrence Day played the 1972 Toronto Championship while stoned on grass. 'Really it was a disaster, result-wise,' he says."

Quote from the first edition of The Complete Chess Addict (Fox & James).

It's a photo of Magnus Carlsen, and actually he looks quite scary! But Viktor Korchnoi at the other end of the corridor was even worse...

Jonathan - check out the link for more explanation. Btw, IM Lawrence Day played in Simpson's over the summer, in the Staunton Memorial Tournament. I suspect his hippy days are not entirely over... And he had a dreadful tournament.

I went along to the Sitaunton Memorial. It seemed to be that Lawrence Day's hippy days hadn't even begun to have finished in any form whatsoever.
I seem to remember an interview with Timmman saying that he experimented by playing chess on acid in the 70s. He didn't seem to think it did any good though.
(Andrew)