Winning with the cat

My two obsessions are chess and cats: one can compare them in any number of ways, but both are cerebral and both, perhaps for that reason, defeat me utterly. To be in the presence of a cat is to be made aware of your own limitations, much as it is in the presence of the board and pieces. Cats have no masters and neither shall I ever master chess, though I can watch either for hours without getting bored. They are perfectly balanced: they are without flaw.

Age cannot wither her, nor custom stale
Her infinite variety

thus wrote Shakespeare of Cleopatra. Queen of Egypt, where they worshipped cats. I use the quote often, to explain what I feel about cats: it will serve just as well for chess, for that matter, as never does the game become too familiar or lose its fascination. 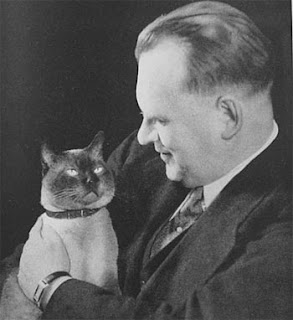 Alekhine was a cat-lover too: not normally known for the admirable nature of his opinions, on this subject at least he showed excellent taste. Whether naming his cat Chess, as he did, was also a manifestation of that taste, I would not like to say (though I imagine it is possible that his missus, Grace Wishart, gave the cat that name). I don't know whether Chess had a fondness for knocking over the pieces on the chessboard, a facility much exhibited by my own cat, Ichy, who will leap up on the table and knock over pieces nine or ten times if necessary.

Normally, it is not, since after three or four attempts I give up and revert to a magnetic travel set. Alekhine's powers of recall were rather superior to mine: he would have had to have extraordinary powers of persuasion, too, to avoid losing his pieces to a determined cat. 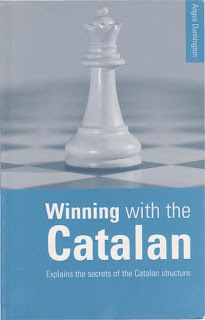 I was thinking about this earlier, lying in bed (I'm not well at the moment) with Ichy sprawled across me and a copy of an Everyman book on the Catalan Opening, by Raetsky and Chetverik in my hand. It's not the only book I have on that opening, which I've been trying to play, on and off, for nearly a decade, with occasional success. My first was Angus Dunnington's Batsford effort, which I still quite like: it's not comprehensive, but it's intelligent and explanatory and that will do when starting out. I even remember buying it - in Blackwell's in Cardiff. Until recently I still had the receipt, since it was serving as a bookmark in the Dunnington volume: it was one of those receipts that doesn't just record the amount of money that you've paid but also identifies the item.

With a book, therefore, this would tend to be the title, insofar as you can get it all on the receipt. Unless you're going to have the widest receipts in the world, this can't always be done.

The names of racehorses are limited to eighteen letters (and spaces) to avoid similar problems, but the names of books are not. This particular machine had room for twenty, so that when the receipt was printed, it read:
WINNING WITH THE CAT
Posted by ejh at 8:00 pm

I took Homage to Catalonia with me when I went to Barcelona last year. Perhaps I should have taken your book instead...

Although I know nothing about chess, I enjoy the way you write about it. I particularly liked this entry.

Cats are indeed masters of their worlds, but they've nothing on dogs who are adept at making humans think they're in charge!

I was going to caption it The Supreme Champion Of The Universe...and some chess player.