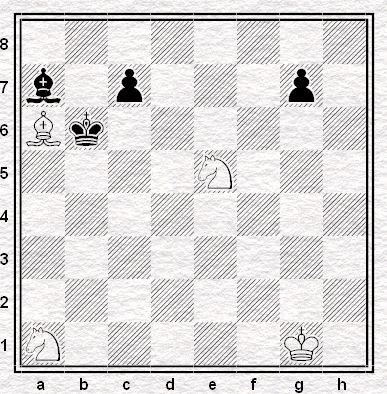 Every now and then, I like to post a puzzle on the blog. I do this when I've found a position that either amuses me, or one where I think the solution is particularly aesthetic, like this one. I like to try to say something worth reading related to the position as well. If I were to post that last link again, I would for instance certainly add this comment from Goran:

There is funny story behind this game. It was two german players, champions of neigbhoring cities, that were playing the match. The guy with white pieces had to hurry and catch up the last train to go home, and in this position he moved quickly 1. Nxe5. After his oponent took 1. ... Bxd1, he resigned and rushed to the station. On the way, he was still thinking about the "blunder" and then he found brilliant idea how to continue the game. He goes back to the cafe and resumes the game to deliever great combination. Of course, then he had quite a walk home.

On the other hand, this position was not so popular with Justin - who quite correctly observed, also in the comments, that: "The only problem with the puzzle is that the key move is a bit obvious given that it's a puzzle." From an aesthetic point of view - maybe it's not such a big deal. But when you know it's a problem - the position is indeed loaded with an absolutely enormous clue. You sort of know what the first move has to be, and then work at filling in the blanks.

This got me wondering. What do you really want to see in a puzzle? A quick tactical test? A novel idea? Just some fun, unusual moves? A really tough brain work-out? You don't mind, provided I don't whitter on too much? Well - I post the above position with such questions in mind - since Lasker, no less, said of this composition that it "comes near to the ideal." High praise indeed.

Well I like a puzzle I can solve - but I'm usually disappointed.

Of course you don't want anything too easy. Ray Keene's 'problems' in the Times are usually completely pointless. Not only can even I find the right move, I very often spot it instantly.

I'm not sure it always matters if the first move looks obvious. Sometimes the amusing moves come later.

Yes, 1. Ne5 is fairly obvious but you have to clarify a couple of points in the winning line to prove that Ne5 is indeed the right way to go.

As I've mentioned on other puzzle threads it's not that unusual for me to find the right move but it is very rare that I can actually analyze things out to the forced win/mate.

I was helped in the line above by the fact that the position comes from a variation I used to play with both colours so it was already very familiar to me.

One kind of puzzle I don't always like, though, are the That-position-would-never-occur-in-a-real-game kind. Sometimes they seem a bit pointless to me.

You have chosen a great selection of puzzles.
This one seems exceptionally hard...
Is the main line to end up with bishop and knight against two pawns?

* Jonathan * - but wouldn't you say the finish of the Taimonov game makes clear the Herlin puzzle does have some potential utility? The Knights Errant also solve unrealistic positions - those the Polgar kids learnt from - in their quest - do you think they (and the Polgars?!) were wasting their time?!

* Sue * thanks. This one is indeed exceptionally hard. The mainline does indeed end up with white losing a knight - but black retains his bishop. Nonetheless, white mates.

I think this kind of puzzles is very useful because it's expanding our "chess vision". Not sure how to explain it, but those puzzles are having imaginative solutions and containing unusual motives which we can then include in our "chess arsenal".

I also believe that puzzles which are making us feel frustration are actually very helpful in training the discipline over the board - an dimension very often underestimated by us non-titled players, but crucial for chess improvement.

I tried to explain, someone with wider english vocabulary would probably do better.