White to play and mate in - apparently - a maximum of thirty-three moves. 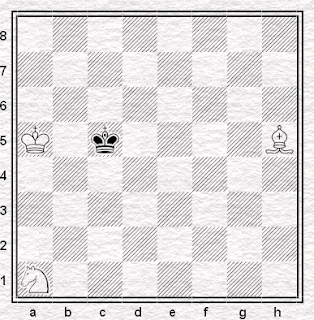 The position comes from Reuben Fine's Basic Chess Endings, still to my mind the greatest chess book of them all and one that probably deserves a better fate than being parked, as mine is, next to the loo. (Although in my case, this does entail sharing shelf space with a translation of Virgil's Aeneid in a probably vain effort to impress our visitors.)

I very much doubt that I could find the mate in thirty-three, though I'm fairly sure that I could do it inside fifty. I learned how to go about it at a training weekend for Hertfordshire juniors in, I'm thinking, 1983. My tutor was none other than Nigel Povah, now of Guildford. He taught us how to manoeuvre the Black king into the "wrong" corner (of opposite colour to the bishop) before performing a delicate sequence which forces the king into the other corner, where he can be mated. You probably have to know what you're doing, as at one point the Black king seems to be escaping from the side of the board.

Being less of a utilitarian and more of an advocate of learning for its own sake, I can't really complain that despite having known, for quarter of a century, how to mate with bishop and knight, I've never had the chance to do it in practice. Not in a tournament game, not in a blitz game, not even in an offhand game. Ironically enough I've had it done against me, at St Albans in (possibly) 1994.

I've also seen it not done, when my friend Sean Terry was on the wrong end of the material balance in a 4NCL game. You can see his opponent fail to win by accessing Chessbase Online Database and inputting Murphy for White and Terry for Black. White's 75th move in particular demonstrates that he didn't know what he was doing. He was - had he known it - quite close to completing the first of the two stages outlined above: but that he was, however, baffled, is confirmed by the fact that his 76th move involved reversing the move that he'd just played.

Embarrassing, no? I think it'd be pretty hard to work it out against the clock, even for a good player, though in truth my St Albans opponent claimed not to have known the technique beforehand. In a blitz finish it'd be even harder. So - can you do it? Can you do it inside fifty moves against your computer? And have you ever had to do it in practice? Have you ever seen it done? Or seen it not done, for that matter?

I learned the B+N pattern last year. Pretty easy once you understand it.

I just had a go playing Fritz 8 who thought it was playing a five minute game.

I forced the King to the wrong corner then accidentally stalemated it there. I'll have another go later... but perhaps it's not too suprising I can't do it. Afterall, I was recently heckled for my lack of technique in R+K v K ending :-(


BTW:
Why do people always say B+N and never N+B?

I had K,N+BvK in a game once.
I managed to repeat the position three times but fortunately my opponent didn't claim this. It was one of those finishes where you get 30 seconds per move.
She did claim the 50 move rule however, but she was one move out and I mated on the 49th move since the last capture.
Still recovering...probably the most unpleasant experience over the board I've ever had.
Is the key something to do with the knight going in a W shape?

Second part, yeah. Matter of fact I can remember showing somebody how to do it at a social event at your house!

Could it be as simple as alphabetical order?

Had another go last night and failed miserably - again blundered into a stalemate in the wrong corner after totally failing to drive the king over to the right one.

Don't feel so bad at not being able to do it afer hearing of SL's problems.

It gives a slightly different figure than Susan did in her account of her game: in fact I have located it here and if my arithmetic is right the mate would have been on the 48th move after the last capture. I've not checked for the repetition!

I think it is because people list the heavy weight pieces first.

48 moves. I was sweating for nothing then!

I wonder - is there any point at which she could have forced you to go beyond fifty?

If you really want an answer to that one Justin, I suggest you spend a little time with the Shredder Tablebase!

I'd rather put my right arm through a shredder.

Im know the fritz database! i ever try that and it is very good to train chess skill.