A point of order

There's a certain flaw in the Raetsky and Chetverik book, involving the main line Catalan - the variation played most often in top-level chess. It involves the means by which we reach the position that arises after the following sequence: 1.d4 d5 2.c4 e6 3.Nf3 Nf6 4.g3 Be7 5.Bg2 O-O 6.O-O dxc4. 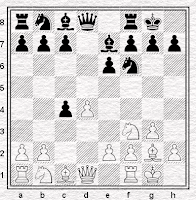 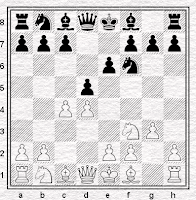 (This isn't entirely true, by the way. For instance the white knight could still be on g1 and the bishop on g2, and this has certain implications if White continues with 5.Qa4+, as Kramnik recently did for instance when playing the computer. However, at the moment we're discussing the normal main line where White continues 5.Nf3 if the bishop has already moved, or 5.Bg2 if it has not. It's the implications of Black's move-order that concern us here.)

Now anyone who's played the Catalan will recall that there are two main options here. One is the line described above, where Black plays 4...Be7 and then captures the pawn on move six. This is generally the more solid line (though this didn't stop me losing a brevity with White against a kid at Southend not long ago - the finish was published in Chess Monthly). For a riskier but more open game, one plays 4...dxc4 (as did Topalov against Kramnik) and then after 5.Bg2/5.Nf3 there's any number of options - 5...a6, 5...c6, 5...b5, 5...c5, 5...Bb4+, 5...Nc6 and a couple of others besides.

Oddly, though one never sees 5...Be7 in the position - or not in the books, anyway. Nor does one ever see 4...Be7 followed by 5...dxc4 - the pawn capture is always on move six rather than move five. This puzzled me in the past and indeed I played that way (4...Be7 and 5...dxc4) in a correspondence game once just to see what happened. Nothing did, except a transposition.

Which takes us back to Raetsky and Chetverik (hereafter, R&C): because their chapter on the main line does use this move order: 4...dxc4 5.Bg2 Be7 6.O-O O-O. They comment, explicitly:

Well, that's clear enough. It's purely conventional to take the pawn on move six: one could take on move five, if one preferred, or move four and then play 5...Be7 and no harm done.

Really? Well, I'd have known no different, but then I read John Donaldson's review in which he observes that there's a good reason why Black doesn't play R&C's move order.

What's that? Well, let's have a look at what normally happens and then we can perhaps see why the move-order may be a problem.

There's a lot of different ways of proceeding from the top diagram, but the one we're interested in here, and Kramnik's current favourite, goes as follows: 7.Qc2 a6 8.Qxc4 b5 9.Qc2 Bb7. 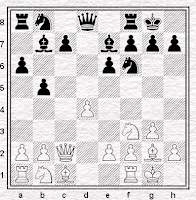 You'll note that White's queen is driven away by 8...b5 and then Black puts his bishop on the long diagonal the very next move.

So what if we use the R&C move order? From this position 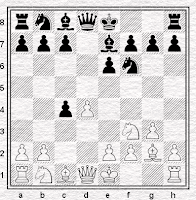 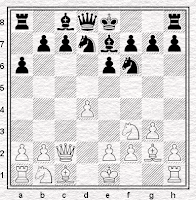 Because now if 8...b5 trying to transpose back into the main line White has 9.Ne5! and Black is in terrible trouble on the long diagonal. This has come about because White hasn't spent a move on castling and therefore has an extra move to get the queen out of range of the b-pawn. White doesn't have this line after 4...dxc4 5.Qa4+ because even if White's played Bg2 already, claiming the diagonal, Black hasn't spent a move on ...Be7 and can therefore use the extra move to do all sorts of useful things. And White doesn't have the line after 6...dxc4 because Black has castled and 7.Qa4 wouldn't be check.

This doesn't mean Black's losing in the final diagram - it's just more difficult to free his or her position, which is what White wants. It's just, as Donaldson says, "a suboptimal move order" and therefore one I'd like to have known about.

But he says more than that.

I am 100 percent certain that the authors know that 4...dxc4 5.Bg2 Be7?! is a suboptimal move order and only used it for ease of presentation, but am not so confident that many of their readers will realize this.

But hang on - that's surely not good enough. Because if it matters, why weren't we told about it? What's going on here - and why? If R&C knew about it why deliberately leave it out? Isn't it precisely because we need to know about little move-order tricks like that, that people are paid to write books for our benefit?

I'd guess that Donaldson is wrong and that they didn't know about this trick - after all, neither did Alex Baburin in his review of the Dunnington book on the opening. Is the trick really that well-known? Chessbase Online Database shows twenty-four games where Black players of 2400+ strength used the "suboptimal move order", including Lautier and Beliavsky. Hardly any of them got beaten and hardly any of their White opponents played 6.Qa4+. So - if it's so well-known, such that we can be 100% sure that R&C knew about it - why isn't it more often played? Or, perhaps - what does the alternative move-order offer Black?

Hearing always the phrase "the book move" -- which suggests some uniformity in theory -- you have to wonder when you see major points of contention about seemingly standard lines. One writer's book may not be as good as another's, and they all leave stuff out--sometimes out of laziness and sometimes to protect their secrets.

I think anyone who becomes immersed in chess theory emerges with a healthy dose of skepticism--realizing that they inevitably have to think for themselves and that they can not trust "the book" to offer them the Truth.

no mention of 6. Qa4+ at all. Neither does the book say that in the more standard move order 6. ... dxc4 transposes back to lines they give earlier.

I wouldn't be surprised if the authors of the book did know full well about the move order trick. I'm sure any number of authors fail to publish (or mention) private analysis in critical lines.

I'm sure a lot of books just copy what's already been written before. It's a lot less effort than actually conducting an original analysis of a key position (or a minor subvariation for that matter).

But the odd thing here of course is that they weren't copying what went before. Or at least I thought not, until you mentioned MCO.

What's most curious is Donaldson's certainty that they must have known about it.

Anyway, in my Team Championship of Aragón match this afternoon I played 1.Nf3 d5 2.c4 e6 3.d4 Nf6 4.Bg5 rather than 4.g3. Nothing to do with the R&C question, though, just a preference for the QGD against a lower-rated player (my Catalan's for the stronger players).