Martin emails this position from Karpov – Taimanov, Leningrad 1977. Taimanov, black, is to play - and described the key move he found to win in this position as "perhaps one of the most beautiful moves of my career." 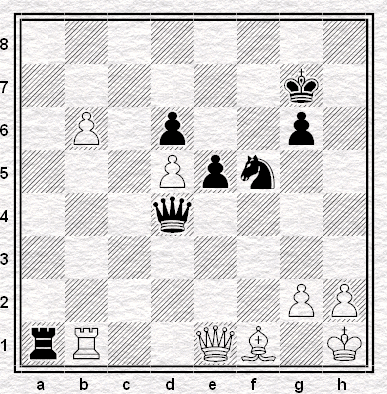 "I wonder if Taimanov knew the Herlin problem?" asks Martin too - and it's a good question.

It also demonstrates the kind of either/or questions I'd been asking before - either Intrigue or Improvement, either Beauty or Bulldozers, or comparing Herlin with Taimanov, we might say either Comedy or Competitiveness - were wrongly phrased. There is no contradiction, unless we force one upon ourselves.

(Incidentally, here is the whole game. Which in turn, made me think of something else again.)
Posted by Tom Chivers at 1:28 pm

Most unusual for Karpov to lose at all at the time, let alone with the White bits: after being declared champion his first loss as White was to Andersson in Milan in 1975. I can find only three others between that and the Taimanov game. At least one is from a simul and I suspect a second one (a Schliemann) may be too.

The Taimanov defeat may have shaken him though, as he lost his next White but one, to Beliavsky.