Picture the scene. A skiing holiday circa 1985 or 1986: two little boys, a pair of five-year-old twins, are looking out the window and seeing what can only be described as a complete absence of snow. Skiing is very much off the agenda, so what to do?

The boys' father, a Mr. Pert, comes up with what will prove to be an inspired idea. Would Nick and Richard like to learn how to play chess? It turns out that they would and in the twenty-five years that follow the boys will go on to share trips to the World Junior Championships, assorted international titles and approximately 5,000 elo points between them before meeting in Sheffield for round six of the 2011 British Championships.


was hardly in keeping with the fighting chess that we've seen at the Championships so far - witness, to cite just one example, the 76-move draw between Nosher and Howell on Friday - but, in the circumstances, I find it impossible to criticise.

As it happens I was drawn to play my friend and fellow blogger EJH in round seven of the Benasque tournament at the beginning of last month and I can't say I enjoyed the experience very much at all. On the one hand I very much wanted to play: I was in Spain only for the chess tournament after all and I was already one game short after my opponent hadn't turned up in the second round. On the other, though, I was rather troubled by the fact that I could only win if a friend of mine lost.

Obviously, it's always true that someone has to lose, but when it's a stranger, or at least somebody that you don't know that well, that's easy enough to accept. When it's the person who picked you up from the airport, opened his home to you, helped you negotiate a foreign land when your langauge skills are sufficient only to ask for a cheese sandwich (un bocadillo de queso por favor), that's a totally different kettle of pescados. I'd never been in that position before and I didn't like it one little bit.

Well, EJH and I played the game and my dilemma was resolved when after a little over two hours we reached this position, 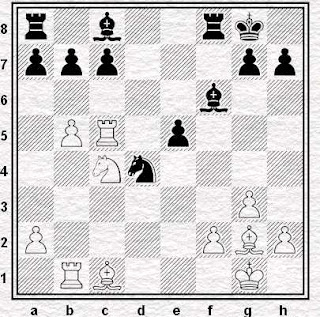 and I accepted Justin's offer of a draw. Against any of the locals, peace offer or not, I'd have just played my intended 21 ... Be6 and got on with the game. Against Justin, somewhat weedy though it might have been, I decided simply to end things there and then and bank my half-point.

Part of my consideration, I have to say, was that even if I did manage to go on to win the game - hardly a given - I'd only end up with a stupid pairing in the next round (elo of 2300-2500 not out of the question), a quick loss and a return back to where I started anyway. From both a personal and tournament perspective, then, taking the draw seemed the sensible thing to do and although any way you look at it the JB v JH pairing in Benasque is small beer compared to Pert v Pert in Sheffield, it did at least give me a little bit of hint at what it must have been like for them.

Naturally I've no idea what made the Perts decide that they didn't fancy a proper game with each other, but if it was tournament considerations it seems to have worked out pretty well for them. After beating Adam Hunt yesterday Nick is in 4th-8th on 5/7 and Richard is in the pack only half a point behind. Both still have very good chances of finishing highly placed - Nick could even be joint second by the time the dust clears tonight - whereas if their game had ended with a decisive result one of them would now be out of the running.

So it could well have been all about the competition, but it's pretty likely, don't you think, that they also remembered when they were two little boys. Should anybody have a photograph of the young Pert twins playing on wooden horses, do please feel free to share it with us.

PS:
The story of how the Perts learned how to play chess comes from the Extras section on Nick Pert's Killer Endgames DVD.

I think taking a draw is fully understandable but given you went to play chess, I don't see what would have been so bad about at least one game against a very strong player, whether you end up at square one or not. In the last but one round this may have been more relevant as tournament position often just boils down to the last round where there are many players much better and worse than you. You seem to be making rapid progress in the last few months so it would have been good to test this improvement out?
Andrew

No that's fair enough, Andrew. I was probably put off by being sorted out in less than 90 minutes by a 2400+ in round three! As it turned out I ended the tournament paired with a 2081, 2089 and 2145 - all three much more highly rated than the usual opposition that I play.

Also, by that stage I'd realised I was in the running for 200 euros prize money and I quite fancied winning that!

There would have been two rounds left assuming you lost to a higher rated though? That would have given you enough time to win the rating prize.
Andrew

Was wondering what the best way to approach playing a friend is. Perhaps you should say beforehand if you want a draw that's fine but otherwise let's fight. You then know where you stand. This is just another example of why I think Sofia rules would place much less pressure on players- they have no choice but to just play.
Andrew

Well, unless they concoct an "amusing" draw of course.