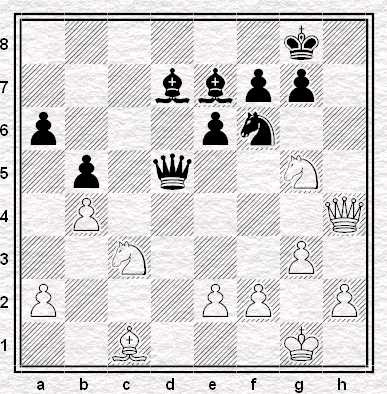 Today’s game is, I believe, unique in the history of World Championship chess.

It’s Euwe to play his 25th move. Earlier in the game he’d sacrificed a pawn for the Bishop pair and an initiative. Immediately before the position above, he’d exchanged Rooks on c1 and brought his Queen to the centre of the board. Alekhine responded by retreating his Knight from e4-c3 to chase it away.

So it’s Black to play and lose.

“An elementary oversight. Correct was 25. … Qc6!” [CJS Purdy – “Extreme Chess”]. You may want to pause here and consider how White should respond. The correct response is most definitely not ...

“The nightmare is over” [Purdy again] and the game eventually ended in a drawn on move 65.


In case you hadn’t already noticed, once Black plays his Queen to e5 White wins with the simple 3-move sequence Qh8+!, Nxf7+ and Nxe5.


Although it’s remarkable that Alekhine and Euwe between them had four bites at the cherry and still managed to miss this line, it can’t be said that these blunders affected the result of the match too much. Alekhine was already 3 games ahead and huge favourite to regain his crown. Missing this win only reduced the margin of victory. Indeed, his domination over Euwe was such that the latter only won one more meaningful game (although he did win the last two long after the match was already decided in Alekhine’s favour).

Similarly, like last time, the blunders cancel each other out and thus the realistic assessment at our start and end point remains “probably drawn”.

Although there’s a certain beauty in a double tandem blunder – and a bonus point under Artistic Merit is in order for this being the only such specimen so far (as far as I’ve found anyway) - my real interest in this game its applicability to me as an average club player.

I believe it was John Nunn who coined the phrase, “Loose Pieces Drop Off”. I’ve found this to be a very useful truism when trying to avoid blunders in my own games. Similarly, when looking to take advantage of an opponent’s position, it makes sense to keep an eye out for pieces that are not defended and thus vulnerable to tactical sequences.

Incidentally, Purdy’s advice is, “To avoid such slips, a player should look at ALL checks.” [his emphasis]

Armed with these pieces of advice, even a mediocre hacker such as myself should find it a trivial matter to avoid missing such sequences.

which leads to an Ultimate Blunder Rating of 12/20 and a well deserved first place on the leader board. It won’t last.

Nineteenth century next time then?

Although if truth be told my personal favourite, still to come, is very much 20th century.

How do you guess these things Justin!?

I am a profesionally qualified librarian and therefore there is very little that I do not know.