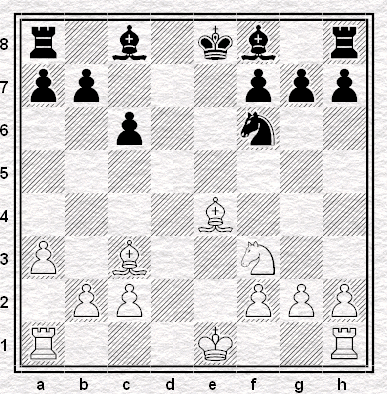 "Thirty next Friday, aren't you Tom?" an office buddy asked me today. Indeed . . . and then we got on to discussing the ways age brings change, and also the ways it doesn't.

For me, it mostly doesn't - or so I told my friend. I still have very similar dislikes and likes to when I was twenty, I said. With age, I've not developed the sophistication that prefers wine to beer, and I still can't stand anything Martin Amis has written. I still like Bach, but I still like Oasis, too. And much to my regret, I can't pretend to enjoy Citizen Kane when Jurassic Park is available on the shelf of DVDs instead.

My office mate is not a chess player, but then it struck me maybe my chess tastes have transformed over time. Ten years ago, my heroes were Kasparov and Tal. And mostly Tal, too. Yet once our office conversation was over, I spent too much of the rest of the afternoon contemplating the position in the diagram.

Dull, I would have called it ten years ago. But in fact, white faces a simple but testing dilemma. Should he play 14. Bxf6, or 14. Bd3? With the latter he preserves the bishop pair, and despite having a slight lead in development, a draw is most likely, due to the near-symmetry of pawns and lack of queens. With the former, black's pawns on the kingside are busted - but white will have to face the two bishops and activity from black.

The position is taken from this excellent Chess Vibes post, with the minor change of a2-a3, to prevent Nd5-b4. I really recommend Chess Vibes, for all manner of reasons. And there's also an interesting ChessWorld discussion about this position.

So: what do you think of this endgame dilemma? And has age made me completely boring, or is there life left in me yet?
Posted by Tom Chivers at 8:03 pm

Martin Amis?... It's ages since I read a book of his (so far as I recall as was impressed with some of sentences but thought he trying too hard to be clever... something of which I'm guilty)

In the position, my instinct (which would probably have been different a few years ago), with virtually no real thought, is not to play B*N as I like the bishop pair and open lines (including for a rook on g8) and there's no easy way to get at Black's bad pawns.

we've known each other a while. i've not had any hint of suicidal ideation during that time. maybe 30's a good age to be in?

As for Amis - I think he wants to write about Worthy Matters - whilst still reaching the stylistic heights Nabokov hit. Alas for him, he's not got Nabokov's wit, musicality, or intelligence. And who needs novels for Worthy Matters nowdays, if that's all they offer?

In chess terms, your 30s is definitely your 'middle game', so don't worry :)