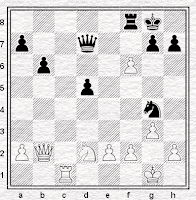 Or at least, the Rest of World Team at Chessgames just recorded an impressive victory over ICCF Grandmaster Arno Nickel - known as 'GMAN' for short. (You might recall GMAN, incidentally, as the guy who beat the mighty Hydra computer in 2004 - by a score of 2½ to ½, no less.) You can play through the game below - or if you want more detail, try wading through the 1000+ pages of analysis at the site itself. A lot of that analysis is, of course, computer generated - but perhaps the game was decided by a human factor after all, since GMAN wrote in his brief post-mortem that:

There is a bit of tragedy in this move 27...Rac8?, as I originally had planned the seemingly better move 27...Re4 (this was part of the plan with the double pawn d6/d5, started by the knight's tour Ne5-g4-d3-b4-d5), but when checking my analysis again, shortly before sending my move, I found it probably would only be a question of move order, as ...Rac8 often had to be played in the ...Re4-variations, and I could no longer stand seeing the poor rook in the corner with tears in his eyes.

Btw, if GMAN kibitzes more, you can find out here.

Now, if that's whet your appetite for Rest Of World matches, then I believe a rematch is planned for later in the year. But if you don't want to wait or that's not enough, then it might very well interest you to know that Chessworld currently has two such games going against equally high-class oppoisiton. One has just started, with Top Ten ICCF GM Ron Langeveld playing 1. d4, and The World currently debating & voting on its reply. Whilst the current, tense position from their other game - against 17th World Correspondence Chess Champion Ivar Bern - is featured in the diagram above, which you can click to enlarge. There, black - The World Team - is to play.

My chess coach, Ed Boyle, plays on Chessworld and is undefeated in hundreds of games - even in ROW matches.

I hope i can get the commenting issue resolved. I don't want you to get discouraged from visiting/commenting etc. I thought i got rid of blogproblems by leaving blogger, and now problems pop up at WordPress :-(

I tried to get support to take a look at it. The anti-spam thingy is called Akismet. It is build in to my weblog to catch spam. It is supposed to learn when you de-spam certain comments. I have de-spammed your comments every time now, and it still hasn't learned a dam'n thing.

* Jim * - you are lucky to have such a strong player as a coach! I know of Ed via Chessworld, although alas have never gotten to play him. Do send him my best regards, he's been a bit quiet on the site recently.

* Edwin * no worries . . . I'll try posting comments when I feel the urge, and see what happens.