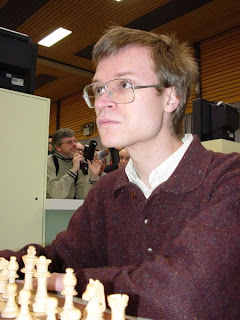 Some upcoming events, ranging from this Saturday in London to July in Spain.

First off, it's another big-money, under 175ECF, one-day rapidplay, courtesy of Chessabit: £500 for the winner, and eight games in one day, this Saturday 20th January, at The Crosse Keys pub in central London. You can find out about past Chessabit events from our previous posts, incidentally, and it's not too late to enter for this event.

Or if you fancy something at a slower pace, then consider The First Brentwood International Chess Congress, held 17th - 18th February. One particularly strong player you might have heard of has already entered the Open. He's pictured . . . but if you need a clue, well: he drew against Kramnik two days ago in Corus! (Incidentally, on the subject of Corus, I really recommend the outstanding coverage at Chessvibes.)

The most recent Surrey Rapid on 7th January also saw some big name titled players turn out, with IM Michael Basman winning the event on 5/6, and GM Alexander Cherniaev coming mid-table with a score of 3/6. The next Surrey Rapid event is on the 11th March, and the entry form is here (PDF file.) There are three other sections below the Open, and once again the excellent "4½ point rule" will apply: "A score of 4½ or more out of 6 is GUARANTEED A PRIZE, even if this means that extra prizes are awarded."

Or if you fancy taking a pop at a Grandmaster in somewhat more favourable circumstances, then Imperial have just announced that "next Monday, the 22nd of January, 2007, has been named as the date for this year's Mestel Challenge, where Dr. Jonathan Mestel, a Grandmaster who has won three British Chess Championships spanning twelve years as well as the 1997 World Puzzle Solving Championships, will be taking on the rest of Imperial College London in a gigantic simultaneous matchup!" But non-members of their club can pay £5 on the night to join in as well. Alas, this clashes with Streatham & Brixton Chess Club's first team London League Division 1 match against Athenaeum - otherwise I'd say, see you there.

Finally, just a reminder of Justin's invitation out to Spain in probably July. Andrew's considering going, and so am I. Anyone else . . . ?
Posted by Tom Chivers at 11:56 am