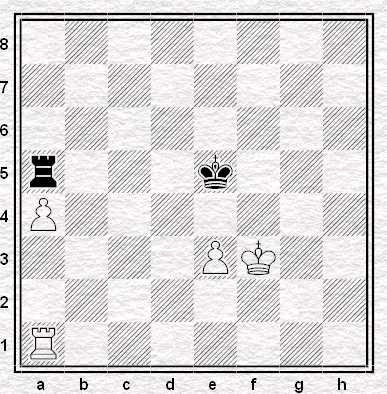 Today’s position, as you see, is a Rook and Pawn endgame. I suspect half of you have already dozed off (and the other half have probably already left me for more exotic chess blogs elsewhere) but WAKE UP. Something interesting is about to happen.

We turn now to “Inner Game”, Dominic Lawson’s book on the World Championship match and Short’s progress to it:-

“… on move 46, Kasparov, moving quickly, committed a colossal blunder, which permitted Short, by a simple manoeuvre, to win one of the champion’s pawns and achieve a dead drawn position. Jon Speelman, who was watching the game, immediately spotted how Short could chop off Kasparov’s pawn and could barely contain himself when, with scarcely any thought, Nigel replied with the wrong move. Five minutes later he resigned, and rapidly disappeared from the stage.

Kasparov then bounced into the Channel Four studio … Speelman interrupted and told Kasparov he had blundered horribly in the ending. ‘No I didn’t,’ Kasparov replied angrily. Speelman then gave Kasparov the relevant position, spelling it out in international algebraic notation. ‘That position never occurred in the game,’ snapped the world champion. But Jon Speelman is a stubborn man. He then directed Kasparov’s attention to the computer which recorded all the moves of the game, and which, too, had instantly recognized that Kasparov had blundered and that Short could have drawn. Kasparov looked, appalled, at the computer screen. He spent the next four minutes staring distractedly into space, and then left the studio without a word.”


So says Dominic Lawson anyway. Curiously, Kasparov’s own account in New in Chess magazine implies that he’d noticed his mistake as soon as he’d made the move!

Anyhoo, the blunder in question is:-

which leads to a drawn position after,

… because Black can get his King back in time. There are a few tricks remaining in this line but its dead drawn.

The blunders, then, simply cancelled each other out. The evaluation of the position moved from clear win for White to certain draw back to easily won. Whatever we might say about this game, however, the match result was already a foregone conclusion. By game 9 Short was already 4-0 down and very much doomed. Indeed, Lawson’s book reveals Short had given up any slim hopes of winning the title by game 4.

Like many club players, I am sadly lacking in endgame technique. My own interest in the sequence therefore is not so much the starting position as the cause of the tandem blunders. It has been my observation in my own games that I often make poor moves after I, consciously or otherwise, stop thinking – e.g. if I believe the game is effectively over. It is gratifying that even World Champions and Challengers can produce awful moves in similar circumstances.

Finally, bonus marks under Artistic Impression are in order for the double blunder and Kasparov's hissy fit after the game. This leaves us with:-

which leads to an Ultimate Blunder Rating of 9/20. That’s good enough for second place on the leader board as things stand but I fear the Kasparov – Short tandem blunder will be slipping down several places in the weeks to come.

I have not read Lawson's book. I assume Kasparov went on to say, "God, Jon, you're right. I do apologise"?

Difficult in a number of respects. Would probably be marginally easier if I had any income!

Lawson's book is an intriguing read.

I agree Jonathan about this probably being a case of 'drowned rat' syndrome: when you feel you're lost, you give up looking for ways out, waiting for the inevitable. Hard not to...

Incidentally, can I hazard a guess from "double double trouble" that the next one is from the Thirties?

Some psychologists once spent their time drowning rats to the point of death, saving them, and then doing it all again, rather a lot. They found that after a while, rats stopped even bothering trying to swim to safety, and would allow themselves to drown instead.

Have you read any Joseph Mitchell, who's mentionned a few times in that LRB piece? I have his big collection 'Up In The Old Hotel', plus the smaller collection of what might be termed his juvenalia (although it's too good for that) 'My Ears Are Bent'. I'd recommend both, although his best & the best introduction to him is 'Joe Gould's Secret' (although both of the articles that form that book are included in Up/Hotel, as well.)

you are indeed correct.

The only air of mystery that remains is when it will appear. My nominal schedule of one per week is turning out to be as accurate as South West Trains timetables.
:-(

The mystery has not gone for me!

I have no idea what *double double trouble* refers to...