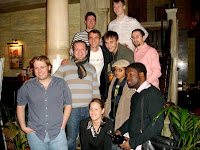 The Third Chessabit Rapid Tournament took place last Saturday at The Crosse Keys pub in central London. Three Streatham & Brixton Chess Club members took part - James, Adam W and myself. Once again big money prizes were on offer, and the first place worth £500 was split between Wood Green's Ali Kikoyo and previously unknown Venezuelan junior Felix Ynojosa. The full report is here - where you might note that a certain blogger was lucky enough to finish outright 3rd, meaning he took home £100 from the day. Some games of his are below, whilst on the right you'll find him in a photo with some of the other prize winners, and the organisers. He's the one on the left as you look at the photo, gaining in chins what he's losing in hair. Competitor Nick Ward said this of the event: "I would definitely recommend the event, I liked the relaxed nature of the day and I had some good tactical rapid play games you only seem to get at an event like that one. Football in the interim was also an added bonus" - and it's hard to find anyone disagreeing with that kind of sentiment. Meanwhile the Chessabit website reports that: "We registered the highest attendance to date (77 players), but still everything went smooth; the venue staff operated really well this time, there were no agitators amongst the players and everybody had fun, even the organizers."

The next event is, I believe, planned for March. See you there?

Rapidplay's not really my thing, but I might try and make it to the next tournament.

Well done Tom. Won't see me there next month though, being a victim of "gradism"! (Cue Angus to tell me that no "gradism" exists at his Richmond Rapidplays!).
(Andrew)

I think you'd enjoy the events Antony. Also if you start to lose, at least this Wetherspoons pub also has some suprisingly good beers...

Depending on when exactly in March the next one is - I have exams at the end of the month - I will try to be there.

I'm not sure I qualify for a well played (having put my memories through that destroyer of dreams, Fritz...)

But, thanks. Hope you make the next one.

"Agitators among the players"?

In the previous tournament several players had kicked up severe fusses, and actually a few got themselves kicked out, of all chessabit events forever I believe!