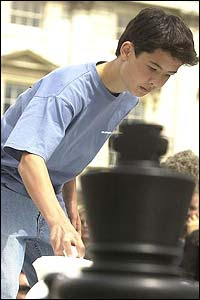 Some good news for English chess from The Guardian (via Susan Polgar): "David Howell became the UK's youngest ever grandmaster in Stockholm yesterday. . . At 16 years one month Howell breaks Luke McShane's UK age record set in 2000 by around six months. Before that our youngest GM was Michael Adams, now the world No9, who did it at 17." 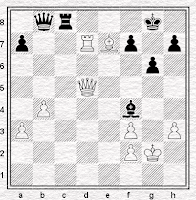 I don't know much about David Howell - and not helping matters, his homepage has apparently been abandonned, and his wikipedia page is not up to scratch. Anyhow, below you can play though a commanding victory of his as white against Graeme Kafka in the 2004 British Championship. The diagram position (white to play; click it to enlarge) is taken from that game too - where Howell's next move forced black's resignation.

I just came across your comment on my blog and pointed me to yours. I've added a link to it on my sidebar. Maybe you'ld like to put up a link to mine on yours. I'll also be following your posts from now on through my feedreader. Take care.

Hi Edwin - are you not currently 'on hiatus'?! "Take me off of your sidebars" it says on the top-most post!

Your blog is snappily written and nicely presented, so drop me a note when you restart it and I'll add it then.

Well, the hiatus part mainly concerns my improvements efforts at chess and active blogging. I do get to go on the Internet every now and then to check out some feeds and stuff like that.

Anyway, i don't really feel the need to remove you from my sidebar, so i'll just leave you on it. See for yourself whether you add me or not. Take care!

I'll leave you off for now, since you have a handful of posts and aren't updating. But once you start updating again, I'll add you then.

Your post about the initial position and 1. d4 being better than 1. e4 also particularly interested. Maybe I'll try to gater more material to work that up into a post over here too - with appropriate links and quoting I mean.