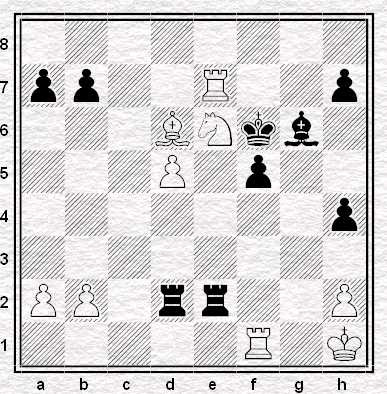 Today we join Chigorin and Steinitz at a crucial moment in their second match. Three years earlier Steinitz had won their initial encounter 10-6 but this time it was much more even.

Chigorin (White, to play) is 9–8 down but a piece up and winning easily here. Victory will go to the first to 10 games but a match score of 9-9 will lead to a period of ‘extra time’ extending the match to first to twelve wins.

Happily for us, Chiggy now came up with the greatest blunder of all time.

to which Steinitz responded,

At a stroke Chigorin had got himself mated and was forced to resign not only the game but the match too.

How to account for such a move? A little earlier in the game Steinitz had sacrificed a piece but didn’t get anywhere near enough for it. In fact his compensation is a single threat – but no worries there because Chigorin has h2 covered with his Bishop on d6.

There is real drama – tragedy even – in this position. Chigorin must have expected Steinitz to play

33. Nf4 more or less forces off a pair of rooks and makes the win simple.

I can just hear Chigorin thinking “Bb4 and the game’s over” as he picked up his Bishop - and so it was, just not quite as he intended.

Regular readers of these posts, if such people exist, might have noticed this entry has not suffered from my normal complete inability to publish on time. Indeed, it was only a couple of days ago that WCQB IV saw the light of day. There is a reason for my uncharacteristic industry.

Chigorin died exactly 99 years ago today. I would like to propose that henceforth January 25th be known as “Chigorin Day” as we all take a moment to remember the man who should really be recognised as the patron saint of chess players.

After all, next time you miss a simple tactic, overlook a trivial win or even tossed your Queen away, what’s the worst that has can have happened? OK, you might have lost a few rating points, perhaps caused your team to lose a crucial match or missed out on some prize money.

No matter. On the way to the pub you can console yourself with the thought that at least you didn’t blow the World Championship in a single move.

which leads to an Ultimate Blunder Rating of 19/20. Truly this was the ultimate Ultimate World Championship Blunder. We shall never see its like again.

This does lead me to wonder about a possible feature: "The Worst Move On The Board". This example wouldn't quite qualify, because although there was no worse move than the one Chigorin played, there were any number of ways of allowing the same mate. But players must, often, have found the only move that lost, or the only move allowing mate in one, or the move that allowed the opponent to win the most material. (In fact, this idea occurred to me after a disaster at Cavendish last season, in which I managed to do something very much like that.)

Watch out for giant potholes!

After 34 Rxb7 it took me a long time to work out what White would play after 34... R*d5 when his bishop and knight are attacked, the latter by two pieces.

Justin:
Worst move on the board. I'm sure I've found that on more than one occasion!

Have decided a better clue for my next post might be in order. I shall only this - it comes from a match that was a bit like Ali getting into the ring with Larry Holmes.

I'm Havana think about it.

correctymundo. Although to keep you in a modicum of suspense I do have a couple to choose from.

I don't think there's a blunder available as alternative to 33. Nf4 - but even so, Chigorin still might have found a way to flunk Tactics 101, based on that form . . . poor guy!