The Worst Move On The Board

The criteria are simple. What we want are examples, from club play to world championship, of players playing absolutely the worst move they could possibly have found. Not just a bad move, not just a blunder. Not just an atrocious loss of material in a winning position, not even just allowing mate-in-one - if there were more than one move that would have allowed it. We want uniquely bad moves: moves of which it can be accurately said that "any other move would have been better". Hence they must fulfull one of the criteria 1 to 3:

That sounds like it allows a lot of moves to qualify. But what makes it hard is the requirement that the move be uniquely bad in the position. We've all overlooked mates in one - but we've generally overlooked them rather than assisted in bringing them about. (Even Chigorin, against Steinitz, had several ways of permitting mate in two - I think I detect four others, not including the move played. Though not all possess quite the same elegance.) Normally we just play a move, not noticing the threat, like Bronstein's loss of a queen against Petrosian in Zurich. Much ore rarely do we play a move creating the threat where it did not exist before. There's usually a choice of equally disastrous blunders. It's much harder to find the absolute worst.

I hope we can find all sorts of Worst Possible Moves (not to be confused with Tim Krabbe's conception here at #334 - or, indeed, The Ultimate Blunder). All different kinds, as above, and at all different levels. (And if anybody can find an example from a computer, so much the better.)

But we'll start, I think, with somebody who was at least close to world championship class (that being the only sort of class he actually possesses) and who, for that matter, was at the time of his blunder, close to playing a match for the title. Talking of class, it has to be the classiest way to play the Worst Move On The Board: allowing an instant mate, a mate in one. Especially so, when it comes completely out of the blue.

Nigel Short has, I believe, only ever lost one game to Alexander Beliavsky - and he had to work hard to manage that. At Linares in 1992, in the course of a disastrous tournament in which he came last of the fourteen competitors, Short had had the better of a long game in the Four Knights' Opening when he reached the following position, after Black's 57...f7-f6+. 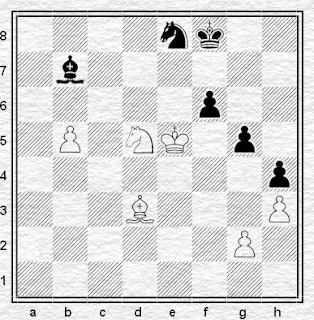 He has, I make it, five moves to choose from: not a huge selection, but even so he did well to choose the worst. It was the last move he was required, or able, to play.


There is an odd sequel, by the way. Ten years later, also in Linares (though not in the top tournament) Beliavsky had the white pieces against Leif Erlend Johanessen. Trying to win a queen ending, he found himself in the following position after 58...Qe4-b1. How is a draw to be avoided? 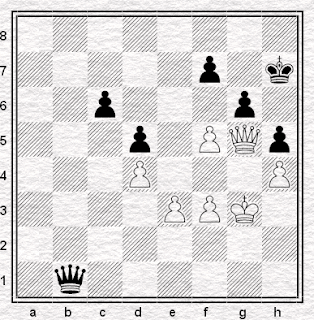 His solution was clever, neat, and instant. And unique: no other move would have lost so quickly. But also, not unique. Ten years after he himself had been the beneficiary, he became the benefactor in his turn. So, not just The Worst Move On The Board (which I invite you to find for yourselves). It was more than that. It was un hommage.
Posted by ejh at 10:15 am

Ok, this second position has had me stumped for quite a while now.

If it's the uniquely worst move on the board, it can't be a blunder of the queen, since there are several ways to do this.

There's worse than that.

Both of these involve forward king moves inviting "backward" killers , which are relatively easier to miss. Have you got any help mates with "forwards" coups de grace ? Blundering into such would presumably rank even higher (lower?) in the scale of worseness...
John Nunn's Puzzle book has a chapter "Find the Losing Move"...I had no trouble at all....

why look for the complex? the idea should always be to find a plausible looking move, but restricts the king's options to allow a mate in one. viz 1.Kf4, Qb8#

Just "for the record" I believe it was Petrosian who dropped his queen to Bronstein.

Now from my own play, this may not strictly meet your criteria, but close! (I am Black)