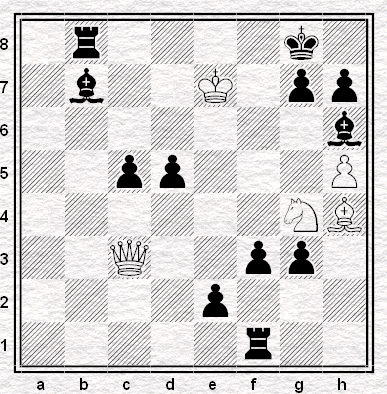 Were I to run a Quote For The Week spot on the blog, this one from George Walker would certainly feature at some point:

One should perhaps bear that in mind when looking at the improbable position above - where it is white - Deschapelles - to play & win, against Labourdonnais, Paris 1820. On the other hand, a quote from the same writer suggests an alternative explanation:

he [Deschapelles] suddenly walked into the Paris Chess Club; and, without the slightest preparation, sat down to play with M. de la Bourdonnais, at that curious variety of chess known as "the game of the pawns", in which the one player removes his queen, and is allowed, instead, a certain number of extra pawns. Deschapelles and De la Bourdonnais played four games at this sitting, even, -- that is to say, eight pawns being allowed alternately for the queen.

Who knows? But enjoy finding the beautiful finish of this remarkable puzzle, all the same.

(Via a forum thread of Chessworld's papadoble with thanks.)
Posted by Tom Chivers at 1:07 pm

I don't believe it!

Pardon the noise as I furiously blow my own trumpet but I've actually been able to solve one of these puzzles.

As usual, I spotted the potential key motif early on but couldn't quite make it work.

Unlike normal, I actually managed to work it through to the end and calculate a couple of sequences that lead to mate. :-)

Now if I could only work out how to win Rook and King against a lone King ....

I failed to solve this one incidentally - I was looking at 1. Qe5 and things like that...

It was the third move in the main line that was the difficult one - a quiet move after a couple of turns of violence.

The secondary line (when Black doesn't recapture on move 1) I was able to calculate straight away because it was just a collection of ideas I'd already tried with other move orders.

I completely omitted even looking at the main idea - I think the mass of material distracted me - similar ideas I have seen before in studies and so forth - it's a great puzzle I think though.

Sometimes you can spend hours on a puzzle (as I have many times), sometimes just a few seconds. Luckily for me this time was just a few seconds (assuming I am right). Often you get guided in the right way by having an idea of what the composer would like to achieve at the end.
Just about forgiven my 2 year old nephew for having his birthday party at the same time as Watford's fabulous cup win at West Ham btw!
(Andrew)

I think context makes a considerable difference - if the position had been given with the heading 'Evaluate this position (white to play, btw)' - it would be a lot harder.

Congratulations on your win!