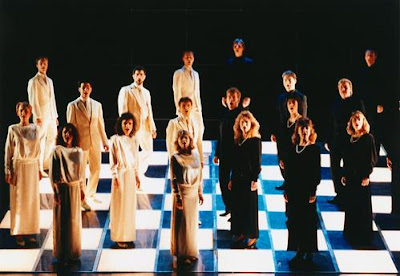 I have a confession to make: it would take rather a lot to get me to go see a musical. However, I've always thought that for obvious reasons, I'd make an exception for Chess: The Musical. Especially, as it turns out, for the upcoming production at the Electric Theatre. Why so? I hear you ask.

Because, Guildford Chess Club - our competitors from the Surrey League - are not only helping with the production, but taking on the audience in the foyer for an hour and a half before each performance! Mike Adams, their Club Secretary, explains more:

"Guildford Chess Club and GSA Conservatoire have teamed up in a unique collaboration for a new production of Chess at the Electric Theatre, opening on 8 February. The musical written by Benny Andersson and Bjorn Ulvaeus [of Abba fame] and Tim Rice [Evita, Jesus Christ Superstar, Lion King etc], is regarded as ‘one of the best theatrical compositions ever written’ and features the story of a world championship chess match between the Americans and the Russians. Set during the end of the cold war in the 1970’s a romantic triangle develops when an American chess champion defends his title against a Russian opponent who secretly plans to defect to the West.

"The psychological battles between the protagonists are played out as much off the chess board as in the games. Although written over 20 years ago, the musical is prescient of recent events - only two months ago the latest world championship match had to be suspended for several days and drew international headlines over allegations of cheating because one player was making frequent trips to the bathroom.

"GSA, whose graduates can be found performing throughout the West End, internationally and in TV and film are delighted to be working alongside local chess champions to add to the realism of this production. Guildford Chess Club, (part of the town since 1896), will playing in the foyer each evening from 6pm prior to curtain up at 7.30pm. Theatre goers will be able to try their skill and learn more about the game through free coaching. The club is also providing props and technical advice for the production. And win or lose, everyone will come away having been entertained by those wonderful songs."

A few more details you might want: this production runs from 8th – 15th February at the Electric Theatre in Guildford. The box office number is 01483 444789. And there's a £2 discount off the normal ticket price of £10 if you quote "Chess Club Offer," to boot!

See you in the foyer?
Posted by Tom Chivers at 8:02 pm

I have a confession to make: it would take rather a lot to get me to go see a musical.

One would not normally confess an absence of sin (a Catholic writes).

It's fun to mix 'em up! Confuses the Priests.

I'd probably go if Guildford wasn't such a pig of a journey.

Just for info, The Electric Theatre is only 3 mins walk from Guildford mainline ststion.