I've represented, I should think, about a dozen different chess clubs in my time, and most of them I can take or leave. One obvious exception is Streatham and Brixton Chess Club - I wouldn't be contributing to its blog from a thousand miles away if I didn't think it had something to it that most of the others didn't. Another is Oxford City, whose magazine, Disinformator, has just produced its latest issue. 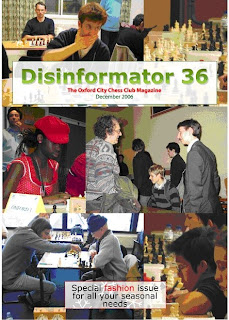 Same principle applies: if somebody's prepared to put in a real quantity of time - and quality of effort - on behalf of a given club, there might well be something to that club that not all other clubs have got. In this instance, the someone is Sean Terry, who puts together the magazine (with the help and contributions of a number of other people).

Disinformator has been running for about ten years now. I'm not sure of the exact date it started, but I left the city in 1999 and it had been running for a good long time already. The new issue has 46 pages of games and reports, from Oxford league and 4NCL chess to international events. (It also includes three games of my own, from the Benasque FIDE-rated tournament last July.)

The price is almost as inexact as most of the chess (Sean tells me "it's about 2 quid, I suppose") but it's probably worth paying for one piece alone, the disgraceful account of how its author won a Major tournament last year from a series of thoroughly lost positions. It's not over until the fat bloke swindles: the magazine is available from Sean Terry on sterry@brookes.ac.uk.
Posted by ejh at 4:45 pm