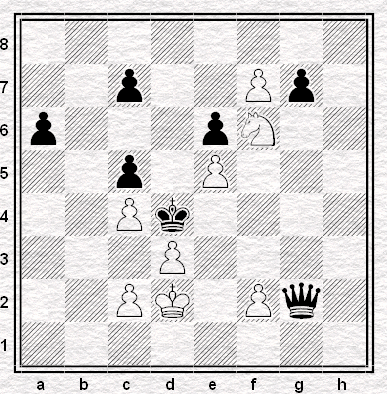 To many European over-the-board players, the name Michael de la Maza will probably not mean very much. But, his book Rapid Chess Improvement: A Study Plan for Adult Players has - as far as I can tell - inspired many, especially American, players to attempt to follow the training regime he created. A regime which resulted in a phenomenal gain of 400 rating points in the course of one year, no less, for de la Maza himself - but which has nonetheless attracted some critical press. Many of de la Maza's followers are also chess bloggers, and they collectively are known as Knights Errant.

One such Knight Errant is Jim Megaskins, who recently posted a Mate in 2 puzzle he had attempted, in order to discuss how difficult it was. I wrote in his comments there how I had solved it in about a minute, but that I would also classify it as difficult - but now I somewhat wish I hadn't. To me, this kind of puzzle - where white has massive material superiority, but finds a crisp, witty way to execute the final stroke of the sword - is a sort of aristocratic intrigue; a refined, armchair amusement if you like. I experience its brief moment of delight an end in itself, but not a means for improvement. So, its competitive benefit is beyond me. And, yes, perhaps - approaching 30 and having learnt the game before computer technology transformed it - my mystification merely signals that I am simply yesterday's man, uncomprehending of a different but coming tomorrow.

On the other hand, the dual value of chess studies (with their more realistic, game-like settings) for both intrigue and improvement, both beauty and edification, is not lost on me. So, perhaps it is not a question of either/or, even if in some places I miss the point. Anyhow. In the study posted here it's white to play - and he appears to be torn between promotion but allowing a perpetual check, or the game continuing but with the loss of the f7 pawn. The latter not good news, you might think, when he's a queen for knight down. So what should white play?

Good luck solving that puzzle. The human intrigue of the future nature of chess improvment may take somewhat longer to play out - but I'd still be curious to know your opinion on both, of course.
Posted by Tom Chivers at 2:48 pm

The puzzle I posted is supposedly one of the puzzles Papa Polgar used to train his daughters.

I can see the utility in it, however. Like you, my chess coach and I both concluded that while OTB we would never waste time looking for the mate, we both thought it was a good way to improve our visualization skills and calculating skills.

Most people who tried it found it to be hard.

Chess improvement of course depends on where you are coming from- I'm on course for my biggest rating gain in years. The secret of my success? Sucking in the second half of last season.
This Rapid Chess Improvement book may have a number of flaws but at least it is getting people to work things out. It is all too easy to "read and nod" as GM Nigel Davies (quoted in Rowson's Zebras book) has put it. Although clearly you need to gain knowledge, what is more important Rowson says is practice. This road-tests your knowledge (do you actually understand what you have been taught) and indeed is what you have been taught actually correct.
Ways of doing include 1. Playing computers. OK I know they will thrash you (and me) so play them from winning positions or start again when you go wrong, swap sides etc. What positions should you play out? Well any really, but why not play positions from your games where you remember thinking there is no way I can win this- let Fritz play you from this position and you will soon find this isn't true. Fritz is very good at destroying any wrong chess knowledge you have also. Also you can use it as an opening aid- play out thematic opening positions- you will get a better feel fopr the opening and will be less reliant on theory 2. Adjournments - one year I spent 30-40 hours each on 3 separate adjournments. This was pre-computer days more or less and I think it was the main factor from improving from the 170s to 190s in 1 year. 3. Blitz chess- It can be "junk chess" but it can also be useful. I don't personally play much of it, but I know of many "blitz junkies" who see strong improvement at slow play chess. 4. Chess tactics site (see link) may be pretty useful.
Anyway enough for now. Well done Wycombe and see anyone who lives in London and gets up early/hasn't gone to bed yet at Trafalgar Square 8.00 tomorrow for the Team Short vs Team Karpov (in Moscow) using giant ice-sculpted chess pieces match.
(Andrew)

King of the Spill said...

There have been plenty of posts about the validity of RCI, and I believe there is some consensus that his approach was the perfect remedy for his own chess weaknesses. Other people's mileage does vary =).

Another consensus is that whatever you "overtrain" you become quicker at and spend less effort with.
---
This problem took me under a minute, but I have been recently working hard on checkmates.

I think it is just fine to call this hard as most of us are beginning to intermediate level players. I think a checkmate is hard in general if it starts with a quiet move, involves a sacrifice not on the first move, involves interference, or anything else that is rare.

* Andrew * - well, I certainly play enough blitz chess . . . I don't tend to 'read and nod' incidentally - I more tend to 'read and get confused'. I am very bad at learning from books - the only one where I'd say I've really come out the other side the way the book intends was 'Chess Tactics' by Paul Littlewood. From all the other books I've read, I would say I've only picked up fragments, and not always clear ones either. Althojugh I've not read that many.

Maybe playing games out with Fritz is the way to go . . .

* kots * yes, I cannot argue with anything you write! Did you try the puzzle I set in the blog post?

I'm glad Andrew's picked up, I remember he was struggling last season.

I improved my results quite a lot over the course of last season - and, like Andrew, this came after a spell of desperately poor form (so much so I was considering jacking it in and becoming an arbiter). I played a summer tournament in which my grading performance was about 130ECF and it was time to give myserlf a good talking-to.

The secret of my sucess - don't think you're better than you are. Or, if you like, maintain your objectivity.

1. Do not try and hit your way out of trouble - it's like a gambler throwing money away in an effort to catch up.

2. Don't start thinking "I must be better because my opponent's worse than me". Play the board, not the man, in nearly all circumstances. Remember it's OK to take a draw against a lower-graded player - it's better than a loss!

3. Don't try and blow opponents off the board when you think you're better. Just keep playing normally. If you don't, you'll likely ruin your own position. If you do, they'll likely ruin their's. It can be an idea just to assume you're no better than equal until the positions proves it's otherwise!

5. If all this comes together and your results improve, don't think you're magically a much better player who can therefore disregard the points above! (I suspect this is the reason why many players make improvements in their ratings and then fall back.)

As one of the few people who has actually undergone and completed the training regimen outlined in "Rapid Chess Improvement," I feel especially qualified to comment on its merits and deficiencies.

I returned to chess after a nine year break from a career that was only about a year long to begin with. I was intrigued by the notion that tactical prowess is the deciding factor in most club level games. It also seemed like something I could get my mind around more easily than say pawn structures or bishop vs. knight scenarios.

The De La Maza program was truly intense. For five months I studied nothing but tactics in a drill format with sessions sometimes lasting three hours. When it was all said and done I felt proud for sticking with it. However, I promptly watched my ICC standard rating drop two hundred points.

The problem? For starters, the program allows for almost no time for the actual playing of chess. I hadn't addressed any kind of opening repertoire at all or developed a thought process. All I had was tactical knowledge but no real way to implement it.

Almost two years has passed since I started and finished the program. My rating has climbed 300 points but I feel that this is due in part to addressing the other weaknesses of my game. I now have a solid repertoire for the white and black pieces. Further, I've gained a sizeable amount of endgame knowledge. Success has come but hardly as the result of my 5 month tactical torture.

There are many ways to improve at this game, and ones weaknesses are surely the best place to start. Tactics play a huge part in the game and certainly underlie strategical thinking. I wouldn't discount De La Maza's ideas outright, but I think they have to viewed in the larger context of very complex game.

By the way, I've enjoyed your blog. Keep up the excellent writing.

Thanks pmd - your experience is quite an interesting one.

I think that if it's the case that 'tactics via pattern spotting' is one dimension in practical chess - 'understanding' (including strategic, positional, openings, endgames, etc) another - and 'control of thought processes' the third - then your experience implies those focusing on just one do so at their peril.