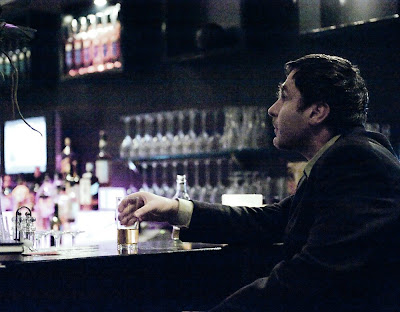 Fred Lucas takes very stylish photographs of top flight chess players, though his stunning portfolio is much broader than that. His chess pictures capture players in action at the board, off the board and, in many cases, stripped of the paraphanalia of the game; thus it is invariably just you, the viewer, and the subject staring at one another. These, to me, are the most interesting. They seem to probe the psychology of their subjects, and this one of super-GM Ivanchuk is a case in point, albeit that on this occasion he looks elsewhere.

If you didn’t know it was Chucky you would have no idea that this guy is a chess player, let alone one of the best in the world. He could be a lounge lizard, a high stakes roller, one of the new super-rich Eastern European oligarchs, or just an ordinary bloke savouring his beer. It’s an evocative image alright; maybe it reminds you of that guy in Hopper’s Nighthawks, alone with his coffee for company, and in the same garish goldfish bowl; or Bogart in Casablanca, playing chess with a drink in his outstretched hand. Not that Bogie looked like a chess player, just as Chucky doesn’t here; a welcome reminder of what we chess players take pride in, but the rest of the world ignores: we don’t, actually, conform to a cerebral stereotype; we own no more, or less, owlish specs, imposing foreheads, or sandals, than the rest of humanity. We’re just regular guys and girls. Except, and I hope he doesn’t mind me saying so, because I’m a devoted reader of his excellent daily chess column in The Independent; yes, with affection, you know who.

It’s the gaze that intrigues, and winds up the psychological drama in this image. I remember being impressed by pictures in the chess press of Chucky at the board staring into space like this, crunching the variations. Maybe it’s easier to be a genius if you aren’t fixated on what’s in front of you. Here he is looking into the distance, but not seeing what’s out there. On the contrary, it is an internal reverie. He is introspecting on what’s in here: his inner turmoil at a missed opportunity, perhaps; his pride in his masterpiece…that Qg7 sacrifice; who knows what - only, let’s hope, himself.

Brilliant portrait photography indeed; and one can ignore any suspicion that it was posed (though I'm guessing it wasn't) after all that’s stock in trade for photographers. But, as a brushes...did I just hear a “snip”?...and paint man myself…snip, snip…who is currently wrestling with the elusive goal of a portrait likeness…snip…and who, by the way, isn’t fooled by that camera doesn’t…snip, snip, snip…lie guff, I can’t help wondering if Chucky was, in fact…snip, snip…watching the footy on the bar-room telly. The answer may be down there, on the cutting room floor (or in this digital age, in the recycle bin).

(Thanks to Justin for the Hopper allusion)