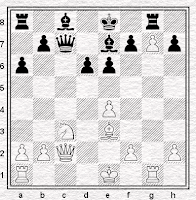 Let's start with two pieces of bad news. Firstly, in the position to the right my opponent played 12...Bd7 after which the game ended in an eventful draw, rather than 12...Bf6. See if you can work out why.

Secondly, our second team - newly demoted to Division Three of the London League - failed in their first match of the new season at the end of September to beat Hammersmith 1, whom they outgraded on most boards. That ten-board match stands 5-4 to Hammersmith, with one game adjourned.

But it's good news elsewhere. On Monday last week our first team bounced back from their earlier defeat by Drunken Knights to win their second game of the season in Division 1 of the London League, beating Hackney I 6½ to 4½ on the night, with one game adjourned. All the more impressive given that Hackney finished second in the League last year, and definitely a victory for strength-in-depth: we won four out of the five bottom boards, with the fifth game the unfinished adjourned game.

And then on Thursday last week, Streatham Thirds played their first match in the London League's Division Four against Wanstead 2, who outgraded the team on all boards. But that didn't intimidate S&BCC one bit, because our side won that eight-board match 5-3. A great start for the team and their leader Chris "Captain Miracle" Morgan.

Finally, if you missed out on the Blindful Simul given at our club last week by Rawle Allicock, don't forget to check out the blog report on that here. In fact even if you've seen that already - go take another look, because you can now also find links to three videos of the spectacular event, left in the comments by Angus. Enjoy!
Posted by Tom Chivers at 10:01 am

Haven't looked in depth but just offering the idea. :-)