As I had the day off yesterday I decided to take advantage of the free wireless internet available at Bar One Bar down on the High Road and watch the start of the second game of the match in rather more salubrious surroundings than my own front room. Aside from the joys of watching world championship chess while slurping tea and munching on a chocolate croissant I very much like the fact that the establishment just along from Streatham Hill station has a large red star on its logo. It reminds me of certain old GM friends of ours.

Anyhoo, I arrived a little late and when I fired up my laptop and my browser spat this position out at me... 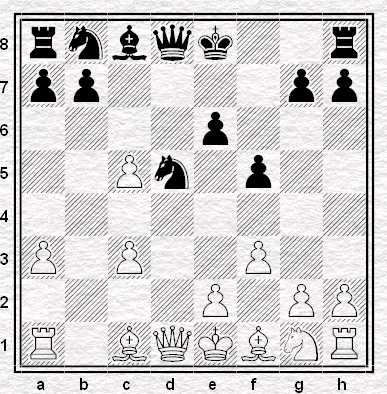 ... I was somewhat surprised to say the least.

It wasn't the fact that Anand had opened 1. d4. Unlike the author of Chessbase's express report I'm not so sure a queen's pawn opening was particularly unexpected. After all Topalov (2006) completely avoided 1. e4 in his match with Kramnik and after a couple of unsuccessful attempts at denting the Petroff, Leko (2004) also switched to queen's pawn openings. Bareev once wrote that Kramnik was surprised that Leko was able to make this change but,

"Anyone from outside can come and look at the statistics and say that the move 1. d4 is possible." *

The same is true for Anand I think.

No, it was the type of position not the opening itself that rather took me aback. It's hard to imagine anything quite as different to the symmetrical sanity we saw in game one. Doubled isolated pawns, weak squares in the centre of the board and only one piece developed between them? Are these guys contestants for the world title or total patzers? For a moment I seriously thought that chesscube had generated a random position and that pretty soon it would be sensible and put the pieces back on their starting squares and start relaying the moves.

If you also pitched up at ChessCube you'd have found that Punctual Malc was reporting the moves comfortably ahead of GM Dimitrov over at chessdom. I found the latter's analysis was more detailed, however, and unlike Malc he didn't get confused as to who was playing which colour. I compromised by keeping an eye on both.

By the way, I mentioned yesterday morning that ChessCube promised daily analysis videos but they have yet to materialise. Similarly, the alleged "three 90-minute Kramnik & Anand historical videos" that they also claim are available free do not appear to exist at all. "[A]nother world first" my arse.

Well that's it from me. EJH will be along a little late with something more in depth.
* From London to Elista, pg: 183
Posted by Jonathan B at 1:05 am

JB, can you tell us some more about Bareev's quote - "Anyone from outside can come and look at the statistics and say that the move 1. d4 is possible"?

Is he saying that 1. d4 is sound (which, of course, it is). Or is he saying that it's possible to take up 1. d4 without too much effort and not be disadvantaged in the opening? The latter would make sense in the context of the discussion but needs some explanation - how do the statistics support the proposition?

Also, I'm wondering how much 1. d4 experience Anand has. I may well be wrong but I didn't have him down as a purely 1. e4 player.

I thought the same too Angus about Anand as white. But then I checked Megabase 2007 and it turns out Anand played 1.d4 only a handful of times in the last few years, mostly in rapid events. He actually really is primarily a 1.e4 player.

Bareev was writing about the Kramnik-Leko match of 2004 and specifically Kramnik's pre-match belief that Leko couldn't possibly play any other first move than 1. e4.

He was saying that although Leko had never previously played 1. d4 in a serious game it was perfectly possible to predict he might in the match ... if you looked at the statistics of previous K-L encounters and K's record as Black against 1. e4 it was reasonable to suggest Leko might try to switch.

RE: Anand. Perhaps not an 1. d4 in recent years but he does have a history of playing it - unlike Leko.

Given Anand's record against the Petroff in general and Kramnik in particular I don't believe it was such a shock to see him switch to 1. d4 either.

I dont think Bareev was making a point about 1. d4 particularly but the likelihood of Leko playing it against Kramnik.

Thanks Jonathan. I understand now.

Though still I'm thinking that a good reason for a non-d4 player not to play the move is the amount of effort required to learn the moves that follow. Even if you're targetting a single player and have an idea how they'd respond.

Yeah that is a good reason. But then not playing 1. e4 because you're dieing on your arse against your opponent's main defence to king's pawn openings also makes sense.