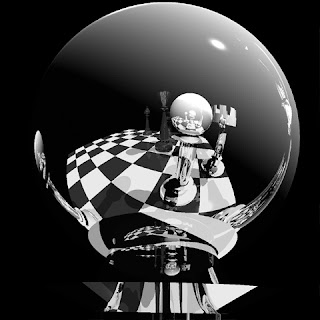 in one of our featured chess videos, whilst a certain ejh claimed culture points for identifying the music instead.
Today, it's Nostradamus Points up for grabs if you can correctly guess what opening will be seen tomorrow at the World Championship in Bonn between Kramnik and Anand.
Here's a few helpful facts to foster your act of prophecy:
Prophecies -and any further relevant observations- all appreciated.
(Personally my money's on the Grob - but luckily I have no money.)
Posted by Tom Chivers at 9:49 am

That said, I think Kramnik will probably avoid the semi-slav for exactly the line you suggest.

He's gone for a Benoni in similar situations in the past. I'd guess that or perhaps even a Dutch Stonewall - an old Kramnik love.

Perhaps Anand will be ready for both of those though. Is one rest day long enough to prepare a KID or Grunfeld?

Rethinking my Grob prediction, how about a Benko?

I spent some time thinking about this this morning.

My first inclination was to think that Anand will stay with 1.d4 just because he's got where he has, so far, by being bold and sticking to his plans. But on the other hand, 1.e4 is his normally favoured move: and, in addition to that, Kramnik has favoured 1....e5 in reply for several years. I think it would be hard to play for a win at WC level facing the Lopez or the Scotch: and if Black goes for the Sveshnikov there is, as I say above, the 3.Nc3 move-order option against which 3...Nf6 is not, apparently, trusted, and which therefore nixes the Sveshnikov. (Yes, you can try and get there via 3...e6, but White can avoid it.)

Alternatively Anand might say well, so what, the Sveshnikov, I've played against that before, bring it on.

If Anand opens 1.d4 - I don't believe any of the Dutch or Benoni stuff, even though, as JB says, he did once play the Benoni in a similar situation (against Leko). He might play it, I suppose if Anand tried 1.d4 Nf6 2.c4 e6 3.g3. More likely he'll aim at a Semi-Slav, but I'm not sure the Marshall Gambit move-order (1.d4 d5 2.c4 e6 2.Nc3 e6 4.e4) will be to his taste and if we go 1...Nf6 2.c4 e6 3.Nf3 d5 then perhaps not the move-order given by Birger above (which allows 5...dxc4) but 4.Bg5! which comes to the same thing after 4...h6 5.Bxf6. (On the other hand, perhaps Black will be happy with that, the two bishops available if the position opens up.) Another route, for White, to a position that may be comfortable for Black but is not too complex, is 4.cxd5 with a QGD Exchange Variation - not the most dangerous variant for White to choose, but one in which it's hard for Black to whip up winning chances.

Or, he might keep his nerve, hold on to his principles, and we'll get a Nimzo.

I think 1.d4 nf6 and the Grunfeld has a good chance of being played.

Also, was I the only person who was baffled why Anand resigned Game 10? It seems the A pawn is winning the game 4 or 5 moves further on.

I thought it premature, especially given that Kramnik has been struggling with accuracy . . .

I believe (I'm out of town so don't have access to my usual computer to confirm this) Kramnik also played the Benoni late on in the Mexico City tournament - against Moro perhaps?

PS: I don't really believe the Dutch stuff either. On reflection I'm was going to punt for a Bb5(+) Sicilian - but you mentioning the ... e6 possibiilty has put me off. And more to the point that may well put Anand off.

Just checked and via a move-order shuffle Kramnik did play a Benoni against Moro.

Funny, I remember that game now you mention it.

Actually I also remember saying at the time "this should be good for Black but Keramniok doesn't know the Benoni"!

I think knowledge does matter. You get the impression from some notes (and from some kibitzers) that the sole point of opening preparation is to surprise one's opponents. Indeed, I have had discussions with my teammates about this, largely along the lines that if you play something you've never played before, just to surprise the opponent, the only person you can guarantee surprising is yourself.

I don't, by the way, think for a moment that Kramnik needs to play something incredibly sharp - just not something that allows White to ease reasonably comfortably toward a draw - and at WC level that's quite a lot of openings.

If Anand starts from the assumption:
"I only need a draw"
then he puts himself at a disadavantage from the start.
He should try to repeat what he did in the first several games. That is to try to outprepare his opponent, bring a novelty, go for his favourite type of positions and aim for a small advantage. Just play the game and do what he can do best. Don't play as if afraid to lose.

I don't see the Benoni coming. Anand would be much more comfortable with the ensuing chaos than Leko was. And I am sure Anand has something prepared for that eventuality. Besides the Slav I can only imagine the Nimzo.

btw, how many Nostradamus points are we talking about? I want at least 5.

(Although I have to say if your first comment is right you get a lot more for that very specific prediction ---- whereas 'Slav or Nimzo' is rather hedging it!)

Didn't see a Najdorf coming though.