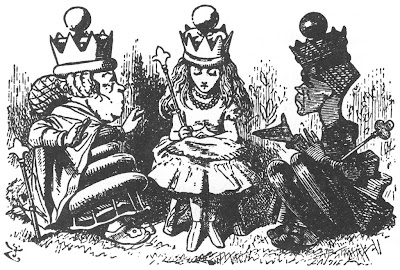 [from Through The Looking-Glass by Lewis Carroll]

[Chess in Art index]
[Chess in Art collected]
[Image from Lenny's Alice-In-Wonderland site]
Posted by ejh at 8:00 am

[Martin's away for a few days: his notes follow.]

This is one of Sir John Tenniel's classic illustrations for Lewis Carrol's Through the Looking Glass, which as every well-read adult knows, is based on a rather eccentric game of chess, which makes this post, not so much "Chess in Art" as "Art in Chess", or even "Art in Chess in Literature", if you insist.

There is evidence* that Tenniel based some of his illustrations for the Alice books on real life people (Disraeli, Gladstone, himself), which could help explain why they are so specific, and are triumphs of characterisation, in spite of being vested in imaginary beings. The Queens are a good example. I'm not sure who the real inspirations were, but they look like caricatures of real people, real governesses, as their bossy, fractious doppelgangers may have been**. By contrast, I've always thought that images of Alice in the books, this one included, are generalised, vague, bland, just as the real Carroll, Charles Dodgson, might have wanted: a blank canvas for his phantasies (even if, paradoxically – which we are allowed to be in Carroll's world - she is based on a real person).

"What's the use of books without pictures or conversation?" are the first words we hear from Alice, in Wonderland, on behalf of Lewis Carroll (i.e. Dodgson) quoting, maybe, the real Alice Liddell (or one of the five Alices, five Beatrices, six Constances etc, 108 in total, listed in his diary** – not, in fact, a laughing matter). So, pictures we get; all of them uncaptioned. They and the story have a symbiotic and reciprocal relationship. You know what/who they are from where they are placed in the text; and in return, the pictures illuminate the denizens of the murky worlds down the burrow or behind the mirror (or in Dodgson's psyche). You might be lost without them.

Grow up Alice! Adult books don't have pictures on the page giving you someone else's version of what the scene and the characters look like. Such would make things more particular than you would want or need them to be; they would fetter your imaginative discretion and lead you, by the head, in undesirable directions. It's bad enough these days when, on top of it all, you have TV and film adaptations of all of the most readable books. Who can pick up Brideshead Revisited without seeing Lord Irons of Castle Howard eating strawberries with Sebastian, or imagine anyone else but Colin Firth straining his chemise, to Jennifer Ehle's delectation, as he squelches out of the lake in Pride and Prejudice. It's dashed annoying when a good book is pre-empted by someone else's view of things. But then who, even (especially?) a grown-up, would know how to visualize a slithy tove without Tenniel's help?

**The introduction to Penguin Classics Centenary Edition of Alice’s Adventures etc. (I got my copy in, n.b. the Adult Section of, Waterstone's in Putney!).

For information: I had difficulties dating the work, since sources differ as to whether Through The Looking-Glass was published in 1871 or 1872.

The book's Wikipedia page gives 1871, as does Google Books and Martin's copy in Penguin Classics: however, the Wikipedia page for Lewis Carroll gives 1872 which date is also to be found on various authoritative online library catalogues, for instance those of the Bodleian Library and Cambridge University Library.

Thank you for your enquiry which was forwarded to us in the Rare Books Reference Team as we deal with enquiries relating to items published before 1914.

I have looked at Lewis Carroll: A biography by Morton N. Cohen, published Macmillan, London, 1995, and have found the following on pages 132-133:

When Charles [Lutwidge Dodgson] suggested delaying Looking-Glass yet again, concerned lest haste mar the book's quality, Macmillan protested (November 6 [1871]): "Your proposal is worse than the cruellest ogre...The book must come out for Christmas or I don't know what will be the consequence..." Later that month the book went to press. Although the title page bears the publication date 1872, Looking-Glass appeared as a Christmas book for 1871... On January 27, 1872, a mere seven weeks after publication, Charles wrote: "My birthday was signalized by hearing from... Macmillan that they have now sold 15,000 Looking Glasses and have orders for 500 more."

Having looked at our catalogue record for the book, it actually says "1872 [1871]" so we are obviously covering all bases with this!

I hope this answers your question.

It does, Ms Kirk, it does. Thank you so much. This is why we have librarians.

This is why we have librarians.

An embittered student writes ... I thought that was so they could sit around doing fuck all at the LSE.

A qualified librarian predictably responds: are you not confusing them with the students?

The LSE students are very busy - mostly talking loudly to each other and letting their phones ring non-stop.