Two in a row

Always look a gift horse in the mouth before you mouth off about it: that's my advice, mostly to myself. No sooner was I advised via the English Chess Forum that Kramnik was being offered at 10/1 to win today's game with White than I was emailing friends all over the place to advice them to put their mortgages on this one. It followed hard upon - another posting on the same forum explaining exctly why the odds were not as generous as they seemed:

Kramnik actually has Black in Game 7, since the colour sequence reverses at the halfway mark (Regulation 3.4.1). I think it's to ensure that the players aren't always in the same situation on the rest days. The same regulation applied in the Kramnik-Topalov match.

Ah - how embarassing. Still not the worst bet in the world, but not quite the get-rich-quick scheme I had imagined. So if anybody who took my advice comes looking for me - you haven't seen me.

I remember, actually, that I also forgot about this regulation when Kramnik played Topalov and thought I must have missed a game before I realised what was happening. That's what happens in your forties - you don't remember things, you just remember that you forgot them the time before as well. Time's wingéd chariot drawing near, I suppose, but anyway - two games in a row with the same colour. 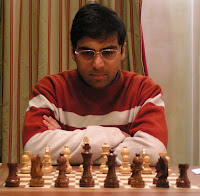 To tell the truth, excepting the previous world championship match I can't recall this ever happening with in the course of one competition, with a full time control: the same two players playing two consecutive games without changing colours. I was trying to think of circumstances where it might have but all I could come up with was the possibility that when the Olympiad was split into Preliminary and Final stages, there might have been a match-up between the same teams and players during the last round of the Preliminary stage and the first round of the Final stage. (This could theoretically have happened: in some Olympiads results from the Preliminary stage were carried over to the Finals stage, although in others, they were not.) However, as it stands the only example that I know of involves the sixth and seventh games of the Kramnik-Topalov match. 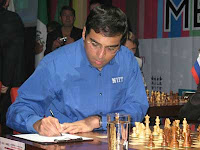 Kramnik was Black in those two games, as he is in the two sixth and seventh games of the present contest: but they were two draws, whereas, of course, he has already lost the first of the pair this time around, and lost it badly. When you've just been crushed you expect to get a break before having to meet the same opening again, at least in the hands of the same opponent. This time, perhaps uniquely in chess history, this isn't true.
Posted by ejh at 5:00 am

Because of the default? Don't think I'd count that.

(Well I say that, Richard - on further reflection, and having woken up a bit more, I'm not so sure. It's complicated by the question of whether or not a game can be viewed as having been played if there's a default. It's there on the results board, but it's not there on the scoresheet. It counts, but it doesn't count. But yeah, let's include it after all, shall we? But if we do.... didn't Topalov actually have three Whites in a row against Kramnik?)