[Our pedagogical series in which we look at a portion of a game I played the previous week in which some obvious tactic is overlooked. Readers are invited to practice their skill by seeing if they can spot what was missed.] 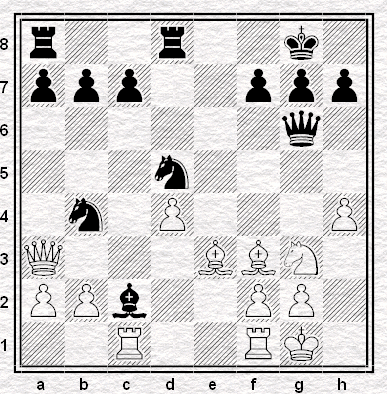 The complete game is given below.

It's a funny thing. Yesterday I looked at the first one in this series - and I still couldn't get it.

Even though I wrote the piece myself.

I was thinking ... Nxe3 based on the knight on g3 hanging if pawn retakes.

I've not got a chess computer where I am at the moment, but neither line is what I had in mind. Does Black have ...Ra6 at the end of Angus' variation?

Jonathan....I spent a lot of time trying to do something like that. But don't forget that where they are at the moment, Black's knights are protecting one another. So if one of them moves....

Umm... What Black does have in the line I suggested is 21... Nxe3 and if then 22. Rxc2 Nxc2. Here White has won Black's queen for a rook and a knight but only after having given up the exchange. This leaves White with Q + N against Black's 2R + N and maybe (?) a roughly equal position. Unless there's something else I missed.

OK. And I assure you, it's not "a roughly equal" outcome we're looking for.

He does, Carsten, he does.

Thanks Richard. Not the strongest Hackney side we've ever faced I think!