Not again! The excitement and anticipation of chess fans was met by a cold hearted opening response from Vladimir Kramnik

So said a rather grumpy sounding Lev Aronian in his Chessbase Express Report for game one of the Anand-Kramnik match. Well far be it for me to contradict the former Rumplestiltskin look-a-like but had he taken the trouble to have a chat with the 25% of the S&BCC blog that resides in Spain he might have a different view.

EJH, I can tell you, was extremely pleased to see an Exchange Slav appear in Bonn. In fact he was rather keen to tell you himself but an unfortunate incident with car keys forced a change of plan and it's me (JMGB) you've got for the time being.

If you haven't already seen the game I'd suggest Chess Vibes as a well worth a visit although you might also want to try chesscube. You have to sign up for the latter but it's free and they seem to be proving live commentary by Punctual Malcolm Pein. ChessCube also say they will be offering a free 20 minute analysis video the day after each game is played. 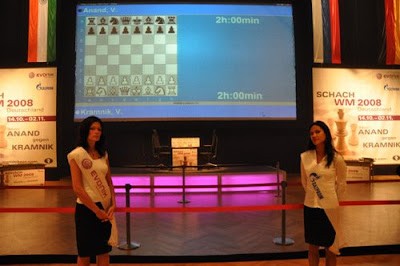 Photograph taken from Chess Vibes.
Their correspondent ('Andy') noticed a small problem with the organisers' preparation.

So what of the prospects for round two later today?

A Petroff, as suggested by our anonymous contributor to the comments box yesterday, would be an intriguing choice. Anand was totally out-prepared by Kramnik when he took on the Russian's Russian both in Mexico City and again in Wijk-aan-Zee in January of this year. Since then, though, Kramnik had that disastrous tournament in Dortmund during which his Petroff got turned over twice. Perhaps they've both got a reason to avoid it?!

Whatever happens I will at least get to see this one as I have the day off. Recommendations of good places to follow the games, and any other match related nuggets, are welcome in the comments box.

OK, seeing as not much happened on the board yesterday I'll amuse you with the keys story.

We've moved to a little village some 25 kilometres from Huesca and there's no direct bus service: after getting off at another village there's a 45-minute walk across the fields.

Anyway, yesterday evening I set off in aforesaid bus, leaving my fiancée and the car in Huesca, since she had work to do, the idea being obviously that she should drive home later.

However, not long after arriving at my stop and starting the long walk home, she called me to observe that our plan was likely to be thwarted by the fact that I had inadvertently taken the car keys with me.

This obliged me, after walking home, to turn round, walk back across the fields and get the next (and last) bus back to town - just in order to arrive at the same place I'd left some four and a quarter hours earlier.

There is perhaps a metaphor here for the opening game, involving the concept of futility.

You are right that Anand was less prepared with petroff in Mexico city but I felt that this was not true in Corus and think that Anand had good initiative almost till the end.