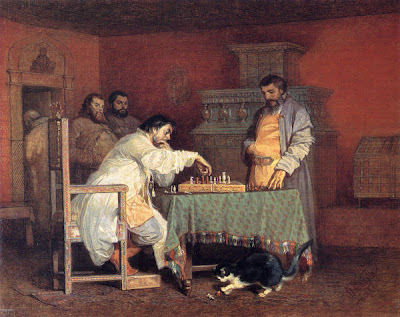 Scene from the domestic life of the Tsar

This one is by a Russian artist who travelled a bit in Europe, painted historical scenes and was elected into the St. Petersburg Academy in 1865. That’s about as much we can find out about him.

The Tsar, in his ornate seat-cum-throne, is playing someone of slightly lower rank who is required to stand, but they are both in superior attire. Behold! He is playing a move! Thus confirming the result of our earlier survey – see Chess in Art XVI – that artists are prone to putting moves into their chess pictures. The spectators, maybe Cossacks, maybe White Russians or maybe something else, must be of even lower status still judging from their plainer clothes.

The players set up a movement that can be found in several chess pictures. As one player leans forward to make the move, his opponent recoils, setting up a see-saw rhythm; you can imagine them rocking back when the move is answered. The cat’s tail joins in. And this is set against the four square geometry of the throne, table and that sideboard affair behind. Even the onlookers seem to sway in sympathy.

That cat is rather engaging isn’t it; playing with the pieces as it would a mouse. But the thespian advice is: don’t act with children or animals, which the Tsars should have heeded, because the pussy almost steals the show. And this takes us to the problem with this picture: Schvarts has overstuffed it with incident. There’s too much going on, it’s mayhem up there: Tsars a-blitzing, Cossacks a-kibitzing, and the abovementioned cat up to all sorts of capers. To help me make my point, someone, top left, has seen the crowded set up and makes his exit and, in my humble opinion, who can blame him.

If you are faced with this sort of busyness, here’s a handy hint for detecting compositional overkill: place your thumb over the problematic spot and see what happens. So; thumb in place, block out the Cossacks and, phew, what a relief: the focus falls on the chess players and the playful puss, unencumbered by superfluous lookers-on. Now, move your thumb and edit out the moggy. This time the Cossacks come into their own. If there’s no cat craving your attention, then the loyal lieutenants may be given their due.

Practise this composition diagnostic at home on a reproduction, and when you have mastered it you can do it with the real thing in a proper gallery thus: pick a cluttered exhibit, stand back several feet, make a fist, straighten your arm, and stick out your thumb in your sightline over the target area. You won’t get thrown out, unless you floor a fellow art lover while so doing.

The picture was painted in 1865, the same year as Schvarts was accepted into the St. Petersburg Academy. Maybe he chucked everything in to impress the selection committee, and fair do’s, he got away with it.