The day I lost to the World Champion 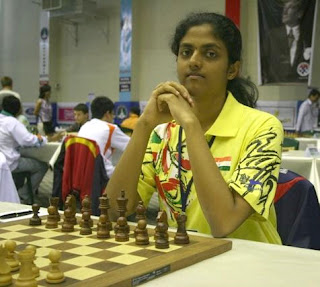 I've lost a lot of games of chess to a lot of different people: if I had to remember all the faces and put names to them, I wouldn't bother with the game at all because I'll probably be the World Champìon at Pelmanism.

However, I was reading the latest New In Chess and there was a face that looked familiar. I know her, I thought. I'm sure I lost to her just the other month. So I looked in my scorebook and yes, sure enough, I had. D Harika, an international master from India: she beat me in the sixth round at Benasque. Nothing exceptional in that, I lost to four other people in the same tournament: rather more exceptional was that the New in Chess report was about the World Under-20 Junior Championships, in which, the month after putting paid to me, my exceptional opponent had won the girls' title. A rather more difficult feat, perhaps.

Dronavalli Harika. (As with Viswanathan Anand, the family name comes first, the other way round from the way we are accustomed to.) Well, here's a thing: how many world champions of any kind am I ever likely to play? 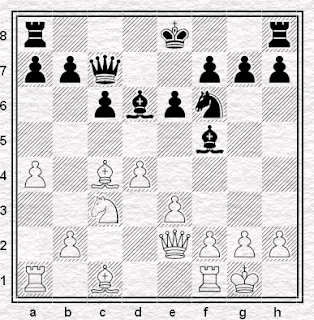 position after 11...Qd8-c7
It wasn't much of a game: I got overoptimistic straight out of the opening and failed to appreciate that the f4 advance I thought I was provoking was, in fact, my opponent's main idea. (Moreover, as it happens 12.e4 would have won straightaway. Which is a few moves too early to be lost in that line of the Slav - and never mind who the opposition may be.)

OK then, own up. Who tipped off Private Eye...?

BTW you're going to have to provide some evidence that 12.e4 wins. It looks a bit dubious to me...

Does the above excuse for analysis hold water?

What do you guys think?