Philidor Could Only Do Three 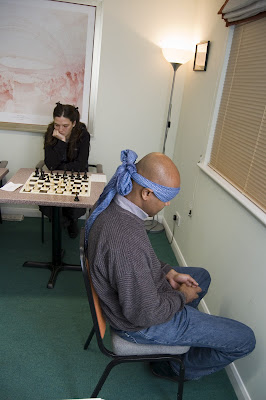 Rawle Allicock took on eight club members, all under ECF110, in his blindfold simul. Final score Rawle 6.5 Challengers 1.5. He by no means had it all his own way, and Rawle was generous with his compliments about Team Streatham's ability to find good moves. They earned a back handed compliment from Rawle, who began to express doubts as the evening wore on about their declared grades!

So six "library" players and two "tennis club" players kicked off just before 8.00pm. It soon became clear that the Challengers had inadvertently deployed a decidedly tricky gambit: sitting at boards 3 and 4 were Gary and Barry, and at boards 6 and 7 were Stan and Sam; most confusing if you are trying to remember, and mentally distinguish, eight different games. 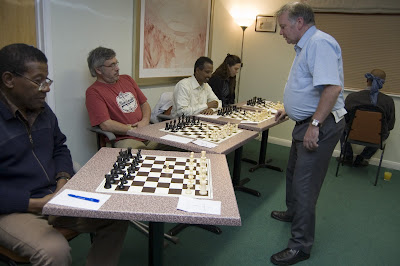 Gambit number two was the unconventional openings Rawle had to face. As he said, he couldn't therefore rely on his memory of standard variations; except in the case of Barry's Philidor (or "Barry Philidor" as he became known, to separate him from neighbour Gary) which went down the main line for ten or so moves. 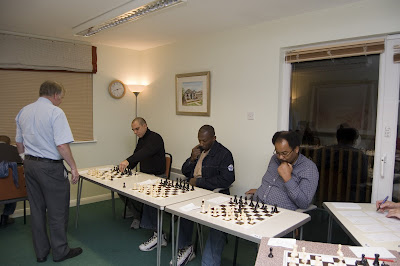 Vad (left: blog photographer) and the infamous Sam/Stan combo.
Not that we managed to fool Rawle with this trick.

The first clean result came as Vad resigned on move 27 faced with mate. Perhaps his mind was on the excellent photos he took of the event. "Barry Philidor" lost the exchange to a combination that he missed, but that Rawle "saw" in an instant. Barry was in good company. Über tactician Robin Haldane ECF 181, who was playing out Rawle’s moves, couldn’t believe what he had announced and hinted that the maestro should reconsider! 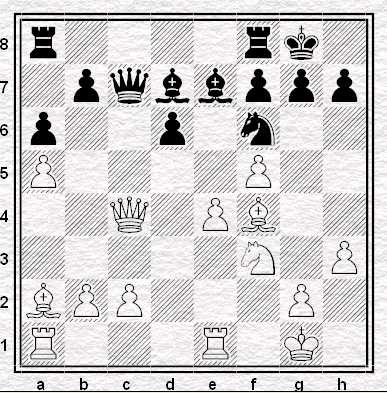 Barry grabbed the pawn on a5 and was hit by the very visual 21 Qxf7+!

Even when if they had lost material the challengers put up stern resistance, and Rawle had to work hard to wear his opponents down. After two hours play Robin is his capacity of Mover/Arbiter/Protector of Rawle’s Sanity adjudicated, with the players' sporting agreement, that where Rawle had a winning material advantage they should concede to leave the field clear for games that were contestable. So Zornitza, Gary, Barry, and Stan bowed out, but by no means disgraced. 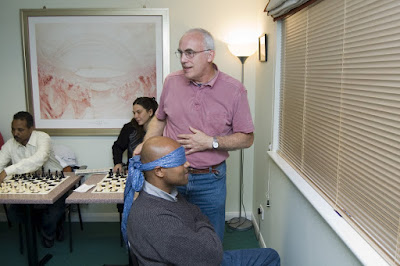 So Mohamed Sheikh Mohamud, Richard Tillett and Sam Ehinlaiye squared up for the final rounds. First blood to Richard, and the Challengers' only victory, as Rawle resigned in the face of unstoppable connected passed pawns on d3 and e3 backed up by rooks on d8 and e8. Two men left standing, and it was now just after 10.30pm. Eventually Mohamed went down after a great slugfest in which he took the battle to Rawle, eventually losing to a splendid combination around move 40.


Rawle graciously agreed a draw with Sam who had played trenchantly for 43 moves, finding the best defence time and time again under pressure. 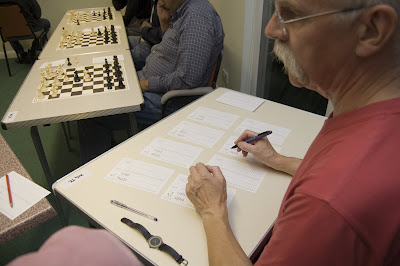 Well played everyone, Rawle of course included. It was a truly mind-boggling spectacle. The sight of Rawle playing out the winning combination after 40 odd moves, and two and a half hour's play against Mohamed ( and seven others along the way) sight unseen, was indeed memorable. We wish Rawle every success in the Mind Sports Olympics in Bejing in the draughts discipline. 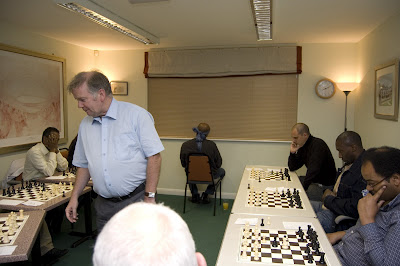 
JMGB writes:-
Many thanks to Martin for today's article, Vad for the photos, Robin for his hard work keeping things moving but most of all, of course, to Rawle.

Fantastic effort. Much appreciation to Rawle. I didn't realise, by the way, that you had to use an actual blindfold - I thought it was a metaphor!

The practitioners of the dark art of the blindfold simul always where one; when there's a photographer around.

That game with Mohamed is one heck of a tussle.

Some video snippits: 1, 2 and 3. Click on 'watch in high quality', just below the video area, for a better quality picture.

Before the start of the first snippit, someone had suggested that Richard might be practised in the art of applying blindfolds...

Thanks for uploading those Angus. I've now embedded the video clips in the main article.

And I have deleted the game (which was making the piece unreadable due to malware) while the videos, it appears, had long since ceased to function so I have removed them too.