After the four games so far played, I find myself thinking: the real star is Anand's a-pawn. It's been at the core of his thinking: it's been his special friend.

It didn't do anything special in game one - or so we thought at the time. 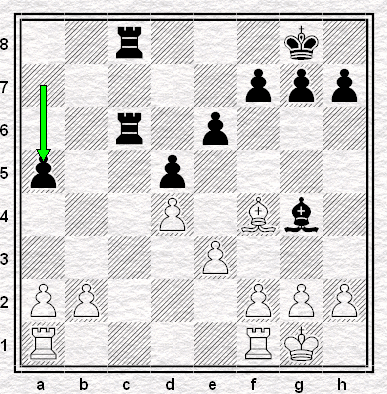 Its appearance was modest enough, moving for the first time on move 17, its only contribution to the game. But when you look back - where were the other rooks' pawns? Back on their opening squares. Of the four of them, only the Black a-pawn got to play. And when it was captured, on move 32 - that was Kramnik's last move. Without the a-pawn, Anand was lost for ideas. He offered a draw.

Game two: he got it in on move five. Pretty much as early as could be expected in a Nimzo-Indian (yes, I know about the Sämisch Variation, but who plays that line nowadays?). 5.a3 - and there it stayed, until the very end of the game. The final position is instructive - the a-pawn is still there, but by this time, protected by a bishop and both of Anand's rooks. A pawn of no little significance. 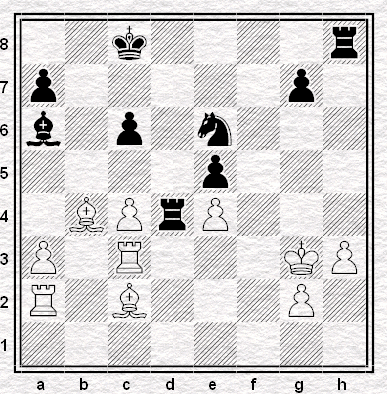 Game three was its finest moment, its tour de force: thrown forward on move eight, when the super GMs have preferred 8...Bb7 for a number of years. Even Shirov, if my source is to be believed, hasn't tried it for a decade and nobody had played it against Kramnik in a year beginning with 2. But off it went, not waiting for the bishop: what do you think of this, then, Mr Kramnik? Were you expecting that? 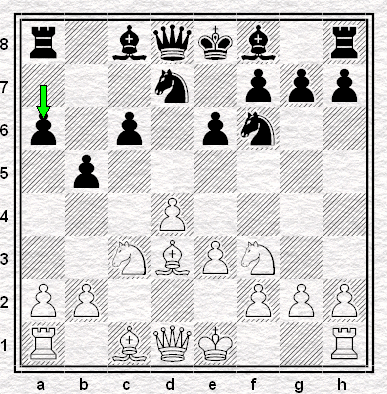 It was a game Kramnik was never really in: on the back foot, white pieces or not, and for my money, on the back foot from move eight. Once the a-pawn had spoken, what reply could Kramnik give?

It was quieter in game four: quieter, but it was a quieter game. And although quieter, not later - a move earlier, in fact, given its opportunity in a position where the c-pawn has for a long time been the more popular choice. 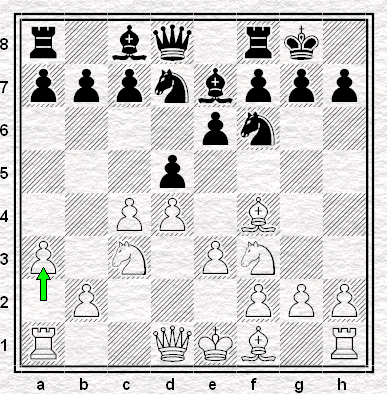 7.a3, a solid move, and solidly in its solid position stood the solid a-pawn until the game was solidly drawn. And today was Sunday, and it rested.

What next for the a-pawn? Perhaps an early showing in a Lopez, if Kramnik switches to the e-pawn. Perhaps even a Chebanenko Slav. Or perhaps a return to obscurity, after its fifteen minutes' fame. But an obscurity of scrapbooks rather than one on the scrap heap, the pawn that they once all used to talk about, the pawn that may have won the world championship for Anand.
Posted by ejh at 6:05 pm

Though it was Kramnik's 'a' pawn which missed a chance for a starring role in game 3. See the comment after White's 29th here.

Sweet little thing, a rook's pawn you are, just one square is all you control. You're so small, almost nothing and throughout the game you've been standing there on your little place, but all that time my hope was built on you, and all my fearful hankering was for you. I did see you standing there, you little rascal. People thought, of course, it was the d5 pawn that it was all about, he drew their attention, they all looked at him, but you and I knew better, it was all about you, about you and you alone.

You've been waiting, you naughty boy, not wanting to come on, because you knew that all the time I was only thinking of you and that you didn't have to do anything at all, because I would be coming to you of my own. Little rook's pawn, you're free now. Go ahead, unspeakable bliss is waiting for you and me on a8. Thank you, you sweet little thing. I love you,

Indeed! And I neglected to note that Larsen, the acknowledged leader of the rooks' pawn movement, once played 7.a3 in the 5.Bf4 QGD against Spassky.

In my opinion, game 3 was excellent and the other games were easily forgettable.

The a-pawn does it again!