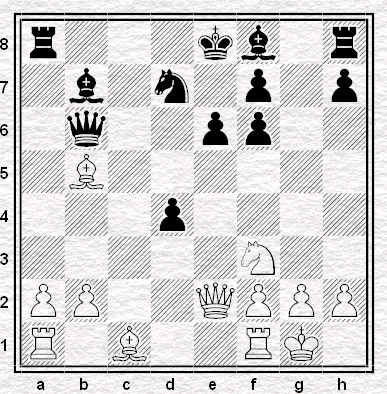 Kramnik-Anand, game three: position after 15.Bxb5
Or, if I put it another way: Kramnik-Anand, game three: position before 15...Bd6. The same position occurred in game five: and this time, Anand didn't play 15...Bd6. I didn't realise this immediately and thought that it was Kramnik who subsequently innovated: perhaps he intended to, he had an improvement ready, but Anand didn't give him the chance to play it.

You wonder exactly how the mind games work, with theoretical duels in world championship matches. How far do you push it down the same line, hoping to get your new move in before the opponent reveals theirs? If you came out better last time, isn't it common sense to do something else the next, because your opponent will surely have found an improvement - because if they hadn't, they would have done something else? Or is there bluff and the calling of bluff? How much faith can you have in the soundness of your systems?

What would Anand have done, I wonder, had the improvement (assuming Kramnik had one) come before the diagram? I'll guess that he thought he knew what was coming, and thought it wouldn't: and if he hadn't been reasonably sure we would have seen a different line. More likely, he was more than reasonably sure. Because he'd learned from experience. Because thirteen years ago, when first he played a match for the world championship, Anand got burned.

Playing Kasparov, and starting with a series of draws, he'd chosen to play the Open Defence to the Ruy Lopez in game six - and secured another one. 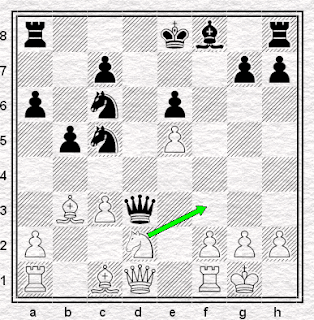 Kasparov-Anand, 1995, game six, position after 13...Qd8-d3.
Kasparov continued 14.Nf3 and although the draw agreement itself was controversial (see the Chessgames notes) one has to assume that the position out of the opening was satisfactory for Black, since Kasparov avoided it with his next White, choosing the Scotch in game eight, the last of the draws. Anand then won game nine, to go ahead: and in game ten, when Kasparov returned to the Lopez, he went confidently into the same line as game six. Kasparov-Anand, 1995, game ten, position after 13...Qd8-d3.
I thought at the time that this was unwise: why would Kasparov, the best-prepared player in chess history, want to repeat the line unless he had something new to show? He did: this time he played 14.Bc2 and Black got massacred. The match score was equalised: but Anand was crushed. He lost the next game too, and three of the following four.

I say I thought at the time - the reason I thought this is that the same thing had happened, to Nigel Short, in the previous match for Kasparov's title.

In game five, Nosher played the Nimzo-Indian defence, the same 4. Qc2 d5 that we saw in game six of Anand-Kramnik, but a rather sharper line: and he got himself a very quick draw, his best achievement in the match with the Black pieces. 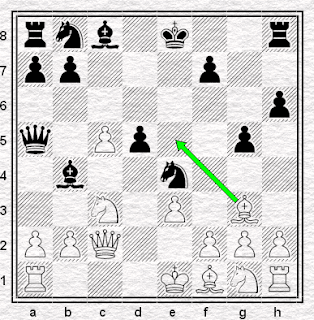 Kasparov-Short, 1993, game five, position after 10...Qd8-a5.
Struggling with the pressure on c3, Kasparov put his bishop on e5, which Short had expected and analysed. I believe I'm right in saying that he'd actually analysed all the way to the position in which the draw was agreed.

In game seven Kasparov responded the same way he would two years on, by switching opening temporarily while the problem was addressed. He won that game, but he had a score to settle: and Short was too willing to let him settle it. Game nine followed the same line as had the fifth, for the first ten moves... 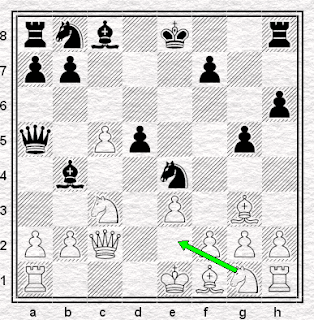 Kasparov-Short, 1993, game five, position after 10...Qd8-a5.
...but this time Kasparov was prepared, played 11.Ne2 and Short found the rest of the game a rather demoralising experience. Too demoralising, in truth: had he been less so, he might not have lost it.

Same story, twice. And twice the player on the wrong end of it found the experience crushing - Anand essentially losing a match in which the score was actually still equal, Short losing a game in which he was not in fact lost. Such an experience, with such an immediate effect, must have a lasting effect as well. Anand must have thought through his 1995 experience and come to some conclusions about what he should do when the situation repeated itself.

Perhaps what Anand feels - perhaps what he's shown in the match - is that Kramnik's no Kasparov. Perhaps. Perhaps had thought that he could risk repeating a successful line, in a sharp variation, in a way he couldn't - and Short couldn't - against a more formidable opponent.

Or, perhaps, he had thought through his experience from 1995 but decided he was sure that this time he was getting his preparation in first. That Kramnik's improvement was bound to be after move fifften - and hence, on move fifteen.... 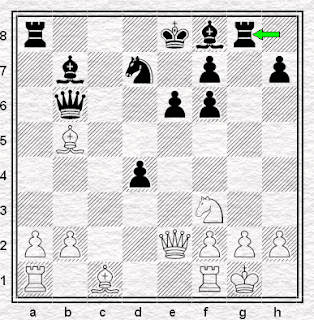 I think one of the main differences between now and 93 and 95 is the role of the computer. Kramnik was too confident in its ability in his match with Leko, and probably was confident in game 5 v Anand about repeating the variation because of what the computer said. Interestingly though, Kramnik obviously in game 3 found an early resources that Anand and his assistants (human and silicon) had overlooked.

Talking of overlooked, Speedy, in re: 6.e3 in the seventh game, has written on Chesscube:

Well mebbe Malcolm, but given that White (who's 3-0 up) can play 10.Qf3 with an all-but-forced draw, perhaps not that unsuitable. (Maybe Black would have gone along with this: maybe he'd have preferred 6...Ndb7 7.Nxc4 Qc7, which is a great deal less fathomable.)