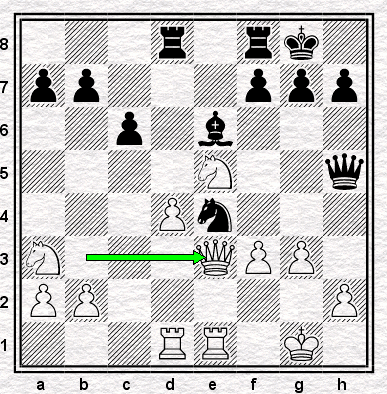 Alas, White played 23.Rh1 instead - and shortly took possession of both the h3 knight and the point.

As I have the memory of a goldfish these days and can have a crack at this even though I know I've already been told the solution.

Right now, though, I can neither remember nor see it.

I have to admit that this is not the easiest in the series....

White's position looks very shaky to me. It's interesting that you played the committal 20...Ng5 leading to a position you had analyzed as 'all right' ---- if that was the extent of the ambition behind 20...Ng5, I would have thought a normal move like 20...Nd6 would have been more natural choice. I wonder ejh if you sensed white was worse and went fishing with 20...Ng5 ---- following your intuition, but then misfired!

Speculation, speculation. I have to say I don't see an easy tactic here. I do wonder though if 21...f6 is an improvement? The position after 22.hxg5 fxe5 looks difficult for white to defend, to me at least. The f3 pawn is en prise and ..Bd5 is coming.

To be honest I didn't really think too much about 20..Ng5 and not at all about alternatives - and so the "all right" is really all about having subsequently realised that the knight was getting into trouble and then having been (wrongly) relieved when I thought it was, as I say, all right.

But do you have any more analysis to add to your useful speculation?

Mm, not sure I have any particular analysis to add. I do think that 20...Nd6 intending things like ..Bd5 and ..f6 looks like a very natural way to organize the pieces, after which a gradual build-up against the d4 pawn looks plausible. So I do think if your mind leaped to 20...Ng5 you probably had a strong feeling white was in trouble, as indeed he looks (offside knight, isolated and blockadable pawn, weakened kingside.)

How much of what I have written is on the right track!?

Well it depends what you mean. You can take it that somebody somewhere missed a clear win, so in that sense you're nowhere near.

Because according to the computer (and my gut feeling at the time, honest) 20...Ng5 appears to give a winning attack, not that the computer uses the phrase.

(Mind you, I was horrified when searching for my record of the game to find I'd somehow overwritten it with the moves from Hebden-Howell, British Championship 2009. I thought this sort of thing only happened with people's wedding videos.)

After 20...Ng5 21.h4, Black doesn't have to move the knight. 21...f6! is very awkward for White since moving the knight on e5 loses material, and trading off the knights opens the f-file for Black and leaves White's kingside very exposed.

Is it ...Nxf3 after Rh1, in the final position? With the way the post is written deliberately putting the reader off the scent.

If that were even a legal move...

It's a way of playing, but analysing further is what this feature is all about....

Finding 2...f6 may well be easy, but it doesn't really qualify as a "tactic", and is unlikely to be a move that "both players missed"

Well, I don't want to send you all on a second day down the garden path, so I'll let you into the secret that it is in fact 21...f6, which wins, for reasons I'll let you tell me. My view is that I should not have played 20...Ng5 unless I'd seen that I could counter the attack on my knight not by moving it but by attacking her knight (which is tactics, no?).

Instead I considered no alternatives to the knight move, which was stupid because if I couldn't see 21...f6 then there were at least two serviceable alternative knight moves which would have kept me, I think, on top.

(Also, it was stupid on general principle.)